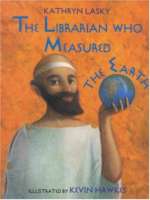 One thought on “The Librarian Who Measured The Earth”