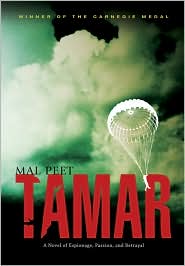 In England in 1995, fifteen-year-old Tamar, grief-stricken by the puzzling death of her beloved grandfather, slowly begins to uncover the secrets of his life in the Dutch resistance during the last year of the Nazi occupation of the Netherlands, and the climactic events that forever cast a shadow on his life and that of his family.

Take a closer look at The Declaration as examined in WOW Review.