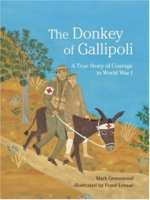 When Jack Simpson was a boy in England, he loved leading donkeys along the beach for a penny a ride. So when he enlists as a stretcher bearer in World War I, his gentle way with those animals soon leads him to his calling. Braving bullets and bombs on the battlefields of Gallipoli, Jack brings a donkey to the aid of 300 Allied soldiers — earning both man and donkey a beloved spot in legend. Two unlikely heroes rescue hundreds of men wounded in war in a poignant picture book based on a true tale of World War I. This engaging nonfiction tale includes a map and brief bios of key characters.

2 thoughts on “The Donkey of Gallipoli: A True Story of Courage in World War I”