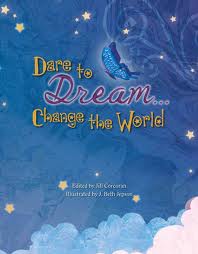 From Jonas Salk to Steven Spielberg, the subjects of these biographical-inspired poems invented something, said something, stood for something, did something, changed something. They dared to dream. Thirty of our nation’s most prestigious poets focus their creative vision on people who not only changed their own lives, but the lives of people all over the world.

One thought on “Dare to Dream… Change the World”