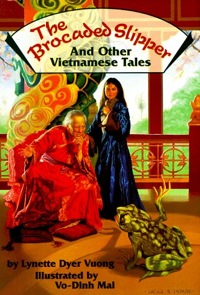 Fairy tales fueled my imaginary life as a child. In my play I became Snow White, Cinderella, and sometimes even the Prince when my friends insisted they must have a turn at the “main parts.” The romance of the tales captured my interest. Waiting for sleep at night, I would create new versions of the stories, always starring myself as the heroine.

My elementary students also enjoyed fairy tales. One sixth grade class, all new immigrants from Viet Nam, became absorbed in The Brocaded Slipper and Other Vietnamese Tales by Lynetter Vuong and Vo-Dinh Mai. After hearing the Vietnamese Cinderella, the title story in the collection, they started an inquiry about other Cinderella stories. That investigation led to a discovery of more than forty other Cinderella stories from all over the world.

My focus for WOW Currents this September will be on fairy tales since I relish the opportunity to explore the genre. I invite you to join in the conversation. What role have fairy tales played in your life? What experiences have you had in sharing them with students? What tales resonate with you? What are your challenges in evaluating and reviewing the tales?

My personal exploration started with finding a definition for fairy tales. In returning to my textbooks of children’s literature, I was intrigued to discover that several terms are used to refer to fairy tales:

So, fairy tales are stories that may have stemmed from the oral tradition or may be original stories. We now typically experience both in a written form. Such stories include magical elements. They are often romantic in nature and can involve a transformations, quests or adventures. We have expectations that fairy tales with begin with “once upon a time,” and that the conflict will be resolved and the characters will live “happily ever after.” The authors of Charlote Huck’s Children’s Literature 9th Edition write, “In fact, part of the appeal of the fairy tale is the secure knowledge that no matter what happens, love, kindness and truth will prevail—hate, wickedness, and evil will be punished”  (p. 281).

Most fairy tales that are published today are in the form of picture books. These stories feature illustrations that expand the text, providing details about the characters and the setting that flesh out the narrative. Finally, fairy tales can be found in all cultures. Here are some favorite fairy tales with lush illustrations:

Next week I will explore the value of fairy tales. I look forward to your comments.