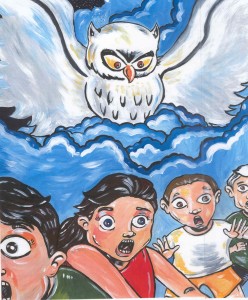 Xavier: We love our Cucuys. We love to be scared. I grew up an avid reader, feeding my head with books such as Stories that Must Not Die, by Juan Sauvageau. I remember a book critic asking me about the practice of using scary stories to frighten children, questioning its use. I told him that it isn’t any different from what happens in American mainstream culture. What we call the Cucuy, they call the Boogeyman. It’s the same thing, with a cultural twist. I was raised by storytellers. My dad and grandparents were storytellers. Eventually I decided to try and get my stories published, rather than just tell them. As a child the moment I was old enough to understand what was being told to me by my parents and grandparents were stories about La Llorona, La Lechuza, and other creepy stories. I didn’t realize when I was a kid, but these stories were the forming blocks that serve as the foundation for my work as a writer.

Janine: Last week several teachers I know were lamenting the fact that their students, all Latino, don’t know the traditional stories, nursery rhymes, and songs that they themselves grew up with. Do you think that this sort of cultural knowledge is being lost? Is it an inevitable part of Americanization, or it is something that we should be trying to prevent?

Xavier: I do think some aspects of our culture are being put in the back burner, but I don’t think that it is going away. If we keep telling these stories, they will keep hearing them. They will take root in the back of their heads, and always be there. My grandfather learned about La Llorona and told my father about it. He in turn told me, and I will tell my son. Americanization works both ways. Yes, American mainstream becomes part of our children’s culture, but our Mexican/Latino stories and culture also becomes a part of that mainstream. American culture is changing, and our Latino culture is at the forefront of those changes. I know that scares a lot of people who wish we were still living in the 50’s, but change is good if it makes mainstream America accept the fact that we are not a single-culture nation, I don’t think we ever were. We are a nation that is highly varied and diverse in its cultural make-up, and we are all the better for it.

In the third part of this interview Xavier will discuss language and bilingualism.

View drawings one fifth grade class made after listening to the book Charro Claus and the Tejas Kid read aloud in the slide show below. Many thanks to Karen Renteria from Roma Independent School District in Roma, Texas, for sharing her students’ work.