Hope is the thing with feathers
That perches in the soul,
And sings the tune–without the words,
And never stops at all,

And sweetest in the gale is heard;
And sore must be the storm
That could abash the little bird
That kept so many warm.

I’ve heard it in the chillest land,
And on the strangest sea;
Yet, never, in extremity,
It asked a crumb of me.

There are authors whose words stay with us long after we have turned the last page and placed the book back in our shelves. For me, Jacqueline Woodson is one of those authors, whose writing stays in my mind, as I revisit the emotions evoked by the experiences of the characters in her stories. In her book Feathers we meet Frannie, a six-grade girl who is growing up in a segregated town during the 1970’s. Frannie’s teacher introduced her to Emily Dickinson’s poem Hope, and Frannie is captivated by the words in the poem. She copies them down in her notebook, and is determined to find out their true meaning. Is hope supposed to feel as light as a feather?

This week, I continue the focus of my blog by sharing the literary responses of a community of elementary teachers to the book Feathers. Together, we read and responded to the story using a combination of response strategies that invite readers to document their initial responses to the text through the use of alternative sign systems. We used Literary Letters as a print-based response strategy, and Sketch to Stretch (Download) as art-based response strategy (Short & Harste, with Burke, 1996). The purpose of both was to capture the readers’ initial wonderings, thoughts and reactions to the story. In the words of Rosenblatt, we were looking to answer the following questions through our responses, “What happened, not simply in the story, but rather within me as I read the story? What things struck me forcibly? What were the “clues’’ in the story that “added up’’ to a meaning for me? What puzzled me?” (Rosenblatt, 1956/2005, p. 70).

Woodson describes that, “Feathers is a book about the different ways people have hope in the world.” Frannie’s world is divided by a highway, which separates the black and the white parts of town. Her life changes the day a new boy comes into her school, a white boy, who is quickly nicknamed “Jesus boy” by Trevor, the trouble-maker in her class. Suddenly this event sets the story in motion, as Frannie and her friends begin to explore their identities and their place in the world by coming to terms with issues of race, faith and difference. In a tight story line where family and friendship are at the center, Woodson writes a compelling novel where hope can be found in our everyday activites.

As segregation continues to define the daily experiences of children in schools today, Frannie’s story raises questions that help teachers imagine what it would be like to live on her side of town. Leah selected the following quote from the book to share her transactions with the story. Woodson writes,

I secretly loved the bright colors of the spray paint—the way the names looked super-big written out like that—like some giant had come along with giant markers. And when I looked at the windows that had pieces of cardboard trying to fill in the places where the glass should be, I thought about the way the sun had to climb over and through the spaces where the cardboard wasn’t to sneak into that house.

Leah explains in her literary letter,

While Frannie is content with living in her home, she also yearns for what may exist on the other side of the highway, revealing that sense of wonder about a life that is different from her own. Throughout the story, Frannie has conversations about this with her friends and with Sean, her older brother. This theme was evident in the Sketch to Stretch that Katie-Lyn created in class, in which the image of building a bridge over the highway that separates whites and blacks in her community is vividly portrayed. For Katie-Lyn, her use of perspective and color adds much to her response, making use of sketching as a tool to represent images evoked by the story. 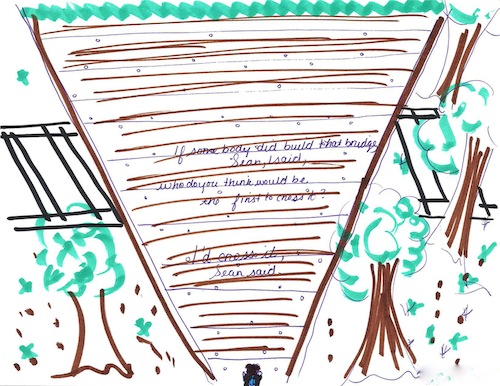 One of the unexpected characters in the story is Sean, who is a young intelligent and attractive young man who also happens to be Deaf. Sean’s character brings depth to the story, as difference in this novel transcends skin color to incorporate Deafness as a natural aspect of human diversity. Frannie is fluent in Sign Language, and this plays a central role in Woodson’s character development. Katie’s Sketch to Stretch artfully captures Sean’s uniqueness, as she illustrated Sean making use of sign language, while also positioning him as wondering what may be found on the other side of an imaginary bridge. 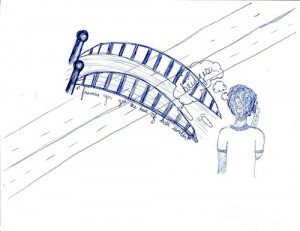 Situated in the 1970’s, Woodson’s novel evokes racial tensions and other social issues of the time that set the tone for readers to engage in contemporary conversations about race and prejudice in the 21st century. In this respect, Danica writes,

The way the author presented prejudice and racism was also interesting. Instead of the typical “black” boy in a “white” neighborhood, it was the “white” boy in the “black” neighborhood. Flipping the table is so important because many minorities are guilty of prejudice as well. Prejudice isn’t something only directed towards one group of people, it can be against ANYONE, and many children of color need to learn that it isn’t right for them to judge based on skin color just because others judge them!

Amanda offers her own interpretation of these tensions in her Sketch to Stretch, as she illustrates a colorful and hopeful message where difference seems to merge with friendship and love to provide an optimistic look for the future, as represented by the bridge. 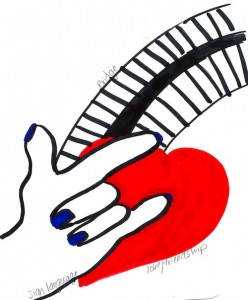 Juxtaposing different response strategies in our reading of Feathers, allowed teachers to experience alternative ways of documenting their transactions with the story. These initial aesthetic responses supported them, as they delved deeper into a critical analysis of the issues identified in their responses through their participation in a literature circle. This week, I invite you to consider the role of multiple sign systems in helping us capture and expand upon our responses to books. When we encounter books that challenge our beliefs systems, how can art help us construct meaning? How does sketching help you identify your connections with stories? How do you engage your students in using alternative response strategies to books?