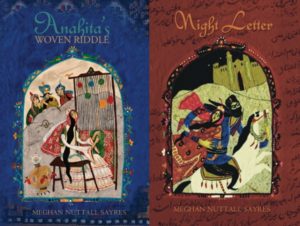 My inspiration for writing two young adult books set in Iran, Anahita’s Woven Riddle, and its new companion novel Night Letter, grew out of a fascination for Middle Eastern cultures. In the mid 1980’s I arrived in Istanbul with a backpack and immediately took to the warmth of the people of Turkey. I also fell in love with the rich colors and patterns of their hand woven carpets. This affinity would lead me further east to Iran.

When I built a house, I bought an Iranian Afshar tribal rug for my living room from a carpet merchant in Pioneer Square in Seattle. At the same time, I gathered a small flock of sheep because I wanted to learn how to weave tapestries, which are much like flat woven Turkish kilims or Persian gelims. My tribal rug’s dissymmetry and unusual designs intrigued me. I studied the symbolism of the colors and patterns in my rug, learning that blue often represented eternal life, and that the “cloud band” border is a prayer for rain. An Iranian friend translated the Farsi words woven into my rug, political remarks by its weaver. The fact that the weaver used vegetal dyes at a time when she could have used the faster synthetic dyes told me about her preference for tradition as well as her personal aesthetics. All of these discoveries revealed who this weaver might have been and she served as a character sketch for my protagonist Anahita. After making several trips to Turkey to study with dyemasters, carpet weavers and repairers Anahita’s story began to unfold. But rather than set my tale in Turkey, I wanted to stay true to my Afshar carpet, and so I set the novel in Iran. This book would be a journey into a land I’d not visited.

When the novel was accepted for publication I was invited to Iran by the late Hossein Elvand Ebrahimi, founder of The House of Translation for Children and Young Adult Books in Tehran. He found me through another American author and friend, Susan Fletcher, whose novel Shadow Spinner, he had translated into Farsi. In an ancient desert city of Isfahan, beneath the towering minarets and blue-tiled walls of the Friday Mosque, I listened carefully to Elvand’s words, grateful for his cultural critique of my story. I saw how his translations of literature for young people awakened readers, encouraged writers and fostered friendships, East and West. I did not foresee then that these thoughts would be the words I’d write in his memory as a dedication in Night Letter.

Little is written in the American mainstream media or published in books for children or young adults about the history and cultures of Iran. My stories are set around the turn of the 20th century at a time when great changes had begun. Railways began replacing camel caravans. Natural dyes the weavers used for their carpet wool were giving way to synthetic colors, and Iran formed their first parliament, called the Majlis, allowing for a more representative government. It was a time when 70 newspapers could be read in the capitol city of Tehran, and those who could not get published in the newspapers, voiced their opinions anonymously through night letters, shabnameh, which were posted in tea houses and caravansarais. Many of the voices were those of women.

What I enjoy as much as writing my tales is visiting with students, librarians and educators to talk about my experiences in the Middle East. My presentation includes cultural artifacts from the region: carpets, rugs, miniatures, jasmine, spices, lapis, beaded Uzbek wedding hats, an authentic nomad outfit (including multiple skirts, a sequined tunic and veil), and even a felted dervish hat that I learned to make in Turkey, home of the whirling dervishes. If you have yet to travel the Silk Road, I hope one day you find an opportunity to venture there.

Meghan discusses the problem with portrayals of the Middle East in the media.

Meghan Nuttall Sayres is author of a new young adult novel set in 20th century Persia Night Letter published this month by Nortia Press along with a re-issue of Anahita’s Woven Riddle (Abrams, 2006) an ALA Top Ten Best Books YA and a Book Sense/Indie Pick. Her anthology Love and Pomegranates: Artists and Wayfarers on Iran will be released spring 2013.