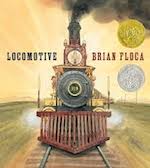 January and February are award months in the United States. We (at least my husband and I) sit before our television and watch to see which members of the various media groups are honored by their colleagues. We debate, discuss, feel old and even yell at the screen as the announcements are made. Although literature for children does not draw a national television audience, it certainly was present on social media and the web. While my phone was not cooperating on Monday January, 27th, and it was so cold in my part of the country that our internet was down, I was able to get bits and tweets of what was going on at the American Library Association’s Mid-Winter Conference in Philadelphia. I did manage finally to get Twitter up and going in time to read the posts of the Caldecott and Newbery Awards. I found it interesting that among the tweets I read as I awaited the final announcement (Newbery Award) someone in the audience posted “I want to send someone a text, but everyone I know who would care is in the audience!” Yes, there are lots of children’s literature fans out there—we are not alone.

To begin, I will start with the 2014 Caldecott Award, primarily because I have been using this book, and our own Kathy Short of Worlds of Words was on the selection committee.

This work of non-fiction is a masterpiece of artwork and information. The book explores the dawning of the transcontinental railroad. We begin our journey in Omaha, NE and end in San Francisco. Along the way we are treated to explanations of how the locomotive works; who works on the locomotive; how the locomotive is fueled; locations through which we will travel; how we will eat for the four to seven days it takes for our journey; and even how we will use the “convenience.”

The illustrations of the text are done in watercolor, ink, acrylic and gouache. They are surprisingly delicate for such a forceful topic. Each illustration contains a myriad of detail. The title page alone has drawings of a Western Union Telegram, a transcontinental Railroad Guide, the Traveler’s Official Rail Way Guide (who knew Fodor’s was alive and well in 1869?­) and a small family portrait. The muted colors in the illustrations suggest the “agedness” of the topic. This is not some new shiny Amtrak engine. This is a steam locomotive of 1869. Still beautiful, but drawn to suggest age.

The text of the book (yes I know the Caldecott is given for the artwork, but really they go hand in hand) is poetic, yet informational. The use of a variety of fonts and sizes helps to emphasize the action. There are labels, and maps which reflect the text. While the language in the text is fairly sophisticated, I would not hesitate to spend time reading this book with my two four-year old, train crazy grandsons. (I’m not being sexist here; I’m just saying that I know two four year boys who will read this book for years.) Well, as I said they probably won’t be reading the text anytime soon, but because the illustrations support the text in the way and discuss a truly great picture book does; working with text and illustration, my grandsons will be able to create their own meanings and enjoy this book for years. Who knows, they might even grow as readers by their repeated encounters with the text and the illustrations.

As for my own use of this book, I have already shared it with my pre-service teachers. I have a group which is currently taking math, science, and social studies methods. They have only been in class for about two weeks (did I mention it’s been cold here?). As we read through it and looked at the illustrations, they began to understand concretely the concept of integration of subjects which is so important in the era of Common Core Standards. In just the first six pages the text deals with vocabulary development (how many ways can you say train?); math (how many one pound boxes of sugar would it take to make a ton? Now how many to make the 40 tons of the locomotive? How long is 50 ft? If you put 100 people on the train, how close together would they have to sit?); science, (how does coal burn—don’t try that demo in your classroom! How is steam made—that you can do in your classroom—hint there’s a demo in the back of the book), and obviously social studies (where does the locomotive go, who built the train and the tracks ? Why were those people available to work on the railway? What is the golden spike?)

As a colleague said to me today—you could spend a year in fourth or fifth grade using only this book! And I do believe she’s right!

The committee also selected Journey, by Aaron Becker, Flora and the Flamingo by Molly Idle and Mr. Wuffles! by David Wiesner as honor books.

Next week: Who are Flora and Ulysses?