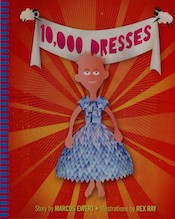 Recent court decisions relating to the legality of same sex marriage and the decision by President Obama to sign an executive order banning discrimination on the basis of sexual orientation by federal contractors are the most recent public manifestations of the long struggle for equal rights and treatment of LGBT people in the United States. These political and judicial decisions both result from and drive cultural changes, which are reflected in popular media, literature, and other cultural artifacts. 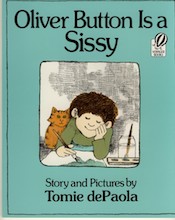 While children’s literature can be a site of challenge and boundary pushing, providing new ways of looking at the world, more often children’s books reinforce and reinscribe an idealized, mainstream view of the world. However, there have always been books that have challenged that perspective. Within this collection of books, one of the earliest challenges occurred with Tomie DePaola’s Oliver Button Is a Sissy, published in 1979. In this book, the main character Oliver transgresses expected gender roles when he enrolls in dancing school and performs a tap dance routine at a talent show. While Oliver is never labeled as gay and can certainly be read as straight, many of Oliver’s interests are stereotypically gay. A year after Oliver Button is a Sissy appeared came the first appearance of lesbian or gay parents in informational picture books, with Your Family My Family (Drescher, 1980). In this book, different family structures, including a family with lesbian parents, are described. 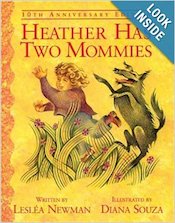 It took longer, however, for openly lesbian or gay parents to appear in picture storybooks in the United States. While a book called Jenny Lives with Eric and Martin (Bosche) appeared in Denmark in 1981 and then in Great Britain in 1983, the first picture book with same sex parents in the United States wasn’t published until 1989. Heather Has Two Mommies (Newman) was published by the small LGBT publishing company Alyson, which established a children’s imprint, Alyson Wonderland, and quickly published 13 children’s picture books with lesbian or gay characters in the next ten years. This included Daddy’s Roommate by Michael Wilhoite in 1990, which was the first picture book with gay fathers.
Many of the early books with lesbian or gay characters were primarily published through small, niche publishers. A few major publishing companies did produce the occasional picture book with a lesbian or gay character, including Oliver Button is a Sissy (dePaola, 1979), Losing Uncle Tim (Jordan, 1989), and My Two Uncles (Vigna, 1995).

These early fiction books were positive towards the lesbian or gay character, but issues related to their sexual orientation was often the central conflict in the story. For example, in Heather Has Two Mommies, Heather is confused and saddened when she realizes that other children have a father and she doesn’t. In My Two Uncles, Ellie is upset when her grandfather refuses to invite her uncle’s partner to an anniversary celebration. Books by major publishers took this tendency further, with most of their early books either informational books about different family structures or fiction books about a character with AIDS.

As time passed, however, the perspective of the books changed and the sexual orientation of the characters no longer was viewed as a problem, but a normal part of life. Books focused more strongly on family life and marriage, with same sex parents as accepted as traditional male-female partnerships. The fact that the parents are in a same sex relationship is incidental to the storyline and usually not directly mentioned.

Next week, I look at how LGBT characters are represented in the collection of fiction picture books, including family relationships and gender issues.