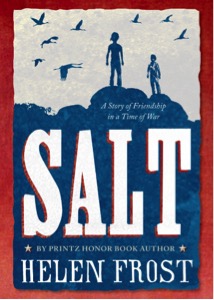 We close our writing for the month of November sharing our exploration of Salt: A Story of Friendship in a Time of War by Helen Frost. This is the final book I chose for a text set focusing on Global Explorations in Verse, which I used in my graduate children’s literature course this semester. As we consider our Thanksgiving celebrations this week, we feel this story provides an appropriate backdrop to consider the relationships between Native Americans and Americans from a historical perspective. Helen Frost’s novel in verse explores the complexities of friendship, when sociopolitical issues threaten to destroy the loyalties and the trust built amongst friends. Anikwa, a 12-year old Native American boy from the Miami nation, and James, an American 12-year old boy who lives near the trading post in Fort Wayne, see their daily lives transform as they get caught up in the War of 1812. Frost’s extensive research, her careful attention to historical detail, and her use of the Myaamia language throughout her writing, all help deliver an unforgettable story that has received praise by insiders of the Miami culture. Salt has also been recommended as part of the 2014 Notable Books for a Global Society by the Literature and Reading Special Interest Group of the International Reading Association, and as part of the 2014 CCBC Choices by the Cooperative Children’s Book Center.

Our blog this week features the small group literature discussion by Melissa and Diana. They present their personal response to the novel, as well as their insights about how Salt could be used in the elementary classroom to help promote intercultural understandings. Diana and Melissa selected to create a Graffiti Board to capture their initial wonderings about this story. They used this Graffiti Board to deepen their discussion about the issues they identified as central to them as readers from the story: Colonization, humanity, and trust. 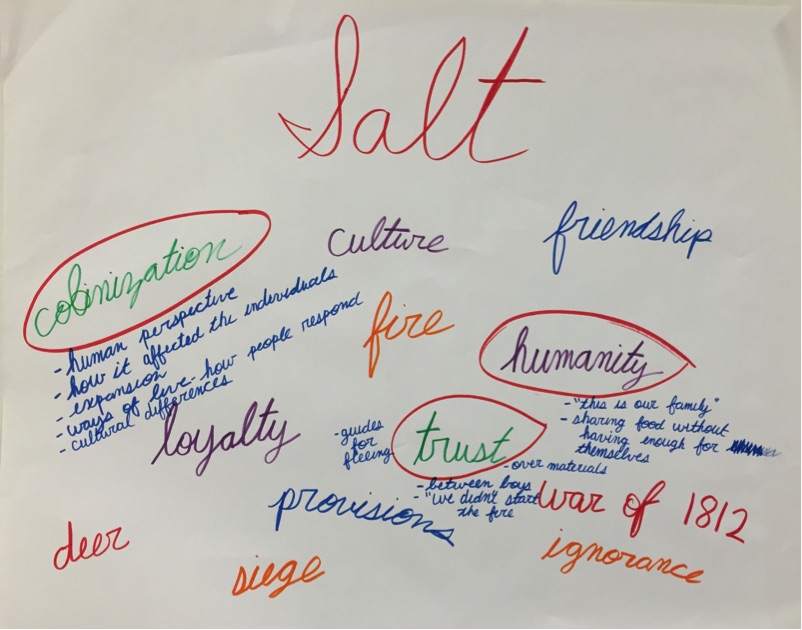 Diana begins her personal response to Salt making note of the way Frost crafts a multivocal story. She writes, “In many war novels, readers typically hear the perspectives of either one of the groups of people involved in the war, or the perspectives of the soldiers who are fighting. Very rarely do we get to read from the perspectives of the “regular people” living at home who are impacted by the war, however; this prose novel allows the reader to understand the perspectives of the American people as well as the Indian people, both living in the area of Fort Wayne known as Kekionga. In my opinion, the consistent switch in perspective is what made the novel so exciting and enjoyable.”

This was echoed in Melissa’s response to the story. “In a lot of our classrooms,” Melissa writes, “students tend to feel that they are the only people in the world that are going through some sort of difficulty; that is not the case. There are always two sides to every story, and I feel that Helen Frost did a great job of showing us this. She took the relationship of two boys who would normally, during the 1800s, never be friends, and showed us their thoughts and feelings towards each other beautifully. We get to see the thought process of both boys at the same time, which is a very unique situation.”

Diana continues her writing expanding on her understandings of one of the main themes they identified in the story. Diana writes, “The theme of humanity was a major aspect of this novel, proving time and time again that kindness is critical in our society. The Americans and the Native Americans were on opposing sides of the war, yet they were still close, and considered each other family. Neither group would leave the other without food, always thinking of how they can help. The Native Americans agreed to become guides for the Americans, offering a safe way to escape. They shared materials, supplies, and their knowledge.” Diana’s writing exemplifies how this particular theme transformed her as a reader: “Seeing such strong examples of humanity caused me to stop and think about how I can improve my own actions towards those around me.”

The theme of colonization is further explored by Melissa. She considers Salt to have an important role in helping students explore historical events and the consequences of colonization. Melissa writes, “Another great aspect of Salt was the use of the time period… We normally teach about expansion from the viewpoint of Americans and rarely do we consider the people we are taking the land from. This book allows teachers to show the Native Americans side of the story when it comes to colonization and losing their homeland. We need to show children that with profit, sometimes comes loss.”

Through our conversations in class about the novels in verse featuring global issues, we have spent time thinking together about how these books could be used in elementary classrooms for foster intercultural understanding and promote global perspectives. Influenced by the work of Short and Thomas (2011), we want to foster opportunities for students to have meaningful transactions with these novels, which could turn into meaningful inquiries for the students to explore.

Diana believes that using Salt in the classroom can be a successful way to accomplish this “because of its narrative quality.” She writes, “Readers turn page after page, reading how Anikwa and James, as well as their families react to the same situations and environments. Readers can clearly visualize how the cultures differ greatly, but the people are still able to get along. Despite the fact that Anikwa and James speak two different languages, they find a way to communicate and help each other in times of need.”

Diana identified a passage at the end of the novel where Frost eloquently captures these negotiations between the main characters. Diana writers, “At the end of the novel, despite the fact that Anikwa and his family have very little food, they share it with James and his family. James is surprised, explaining, ‘They hardly have any food. Why/ are they feeding us?’ Ma responds, ‘You should know by now. This is who they are’ (Frost, 2013, p. 127).

For Melissa, Salt is a novel that explicitly invites students to consider multiple perspectives, by “reading about one particular moment and being able to see it through both boys eyes.” Melissa identified a passage in the story where the writer “takes a specific moment and allows us into the minds of what James and Anikwa are thinking at the same time.” Melissa writes, “We hear Anikwa, ‘It looks like James… walking right toward me!’ (Frost, 2013, p. 71). Then we hear James, ‘Hey! There’s Anikwa, walking off with my rabbit!… Anikwa stole them!’ (Frost, 2013, p.72). Next Frost goes back to Anikwa stating, ‘He thinks I stole that waapanswa (rabbit) from his snare!’ (Frost, 2013, p.73).

Melisa explains, “The multiple points of view allow the reader to get a full idea of what is going on in both boys’ minds as the situation is taking place. Anikwa is trying to save the rabbit from being eaten by a fox thinking that James is in the Fort and James is so hungry that he is willing to leave the fort to get the rabbits that he caught before leaving his home.”

Diana and Melissa believe that, “A significant goal for inviting students to read this novel would be to understand the multiple perspectives of everyday citizens who were impacted by the war based on circumstances beyond their control.” They also write that they “want teachers to know that it can be difficult to tell both sides of the story when it comes to the past but it is something that needs to be done.” This week, we invite you to consider how we can bring multiple voices in our exploration of global perspectives into the classroom, as we acknowledge this particular time in history in light of our Thanksgiving celebrations this week. How have you used Salt in your own classroom? What have you done to accomplish the telling of stories from multiple perspectives?

3 thoughts on “Global Explorations in Verse: Salt: A Story of Friendship in a Time of War”