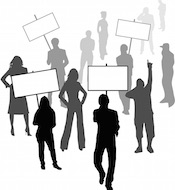 With a powerful title framing their session, four authors spoke to the theme of resistance and to the notion of “enough is enough” as they connected a recent work to contemporary social issues. The panel included Larry Brimmer (Strike, 2014), Margy Burns Knight (Talking Walls: Discover the World, 2014), S. D. Nelson (Digging a Hole to Heaven, 2014), and Eugene Yelchin (Arcady’s Goal, 2014)

Representing different genre and including both picture and chapter books, each author responded to how they portray characters who resist and work to create change. Larry Brimmer’s book Strike, the Farm Works’ Fight for Their Rights begins in 1965 when Filipino workers refused to work and continued shortly thereafter when Cesar Chavez focused on the struggle for adequate pay. Brimmer is known for his skillful approach to social issues using well researched text and photographs. He engaged listeners in both how he unveiled this story, beginning with the Filipino workers rather than Mexican workers and while providing many little known facts about the strike. Larry’s passion for bringing social justice issues to the forefront was evident as he wove the conversation among other of his books.

Margy Burns Knight is well known for her first book, Talking Walls, and while this newer edition reflects much of the first edition, she also pointed to new information. She highlighted that Nelson Mandela was one person she was adamant about keeping in her collection here and addressed the issues of resistance that formed the voices for the many walls included. Margy shared how pleased she was to be able to address her books from this particular stance—resistance. She reminded listeners that such a topic is not one that is invited into schools, although there are opportunities to bring social issues as this into her talks.

S. D. Nelson shared his newest title, Digging a Hole to Heaven, Coal Miner Boys. Through compelling narrative, rich revealing original artwork, archival images, and authors’ notes, readers learn of child labor in the mines from a different perspective–a twelve year old boy and his mule who spend every day deep within the mines. S. D. shared his passion to create awareness of the sacrifices in lives, health, animal and workers’ rights that existed to unearth coal – a substance that literally made the Industrial Revolution possible. However, throughout the session, S. D. continually reminded us that the rights of workers around the world, including child labor, is still an ongoing issue as are the environmental concerns of today. His talk clearly emphasized the phrase, “enough is enough” as he drew attention to current events that connected to this topic.

Eugene Yelchin in Arcady’s Goal shares the situation of a young boys whose life in the orphanage during the time of Stalin is focused on soccer as a means to survival. With autobiographical insights to an era that continues to wear hard on the emotional lives of Russian people, Yelchin spoke quietly but pointedly during the session. When asked about his approach to research, he commented that for him it was relearning what he thought was true—reading to research the truth. The portrayal of the darkness of the context in Arcady’s Goal was attributed to his living this situation.

Each of the panelists expressed their appreciation of the session topic—one that invited their personal concerns for social justice that was woven throughout their books. This interest continued after the session when they requested that such a theme be ongoing in future Festival panels. The audience revealed a similar attitude through their questions that focused on social justice issues during the well attended session.