This week we continue our focus on Afro-Caribbean influences in Latino children’s literature but also start addressing Indigenous perspectives. Silver People: Voices from the Panama Canal, another historical fiction novel by Cuban-American author Margarita Engle, offers a window into the experiences of Caribbean islander workers but also into the experiences of indigenous communities in the context of the construction of the Panama Canal where thousands lost their lives. Engle reminds the reader of the historical fact that about twenty-five million Caribbean islanders emigrated to Panama to work on the canal. Workers were subjected to racial categories where mulatos lived in almost slavery-like conditions and were paid with silver coins (the Silver people), while Europeans, were paid in gold. As one of the characters reflect:

The rules of the census confound me.
I’m expected to count white Jamaicans
as dark and every shade of Spaniard
as semi-white, so the Americans
can pretend
there’s only one color
in each country.

Engle’s poems capture the hope, despair, drama and desperation of the young men lured from the islands to work in such gigantic engineering project but also capture the voices of native people who saw their forest destroyed and reduced immensely. Through the character of Anita, the author highlights the knowledge and resilience of indigenous communities who were displaced. The celebration of the Panama Canal silenced these voices and they become alive in Engle’s novel.

A salient feature of the novel is how nature also plays a critical role by voicing its concerns. Through the use of personification, Engle highlights the environmental impact of the construction of the Panama Canal by giving voice to nature: trees, leaves, frogs, every creature and part of nature talks. Engle’s use of personification inspired Richelle, a student in my Latino Children’s Literature course, to express her meanings through the creation of the collage described below.

The personification of the canal as a serpent was one of the literary aspects that struck me as the most telling in that it provided the reader with a tangible way to understand the poisonous nature of the canal and the destruction that it caused the natives’ lives and homeland. Thus, I created a collage of colors to represent the transition of the forest, and I used a piece of rope to represent the serpent snaking through it, leaving desolation in its path. I visualized the story in three distinct phases. During the first few weeks of building, the forest reined and provided food, shelter, and life to the animals and people who inhabited Panama. 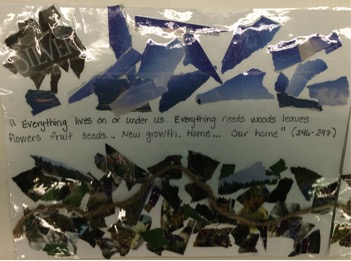 As the construction of the canal continued, as told immaculately by the poems spoken by trees that I incorporated in each phase, the beauty of the forest was compromised and destroyed by the power hungry wealthy from the United States. 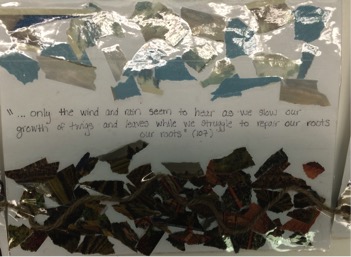 The juxtaposition of the two different peoples’ perspectives was a great way to understand just how little the white men understood and appreciated the natives’ cultures. After hundreds of deaths, injuries, and sufferings, the canal was completed, yet the forest and its inhabitants were left homeless and the rich life that once characterized Panama was lost, reduced to a small space while most of the forest turned into a desolate wasteland. 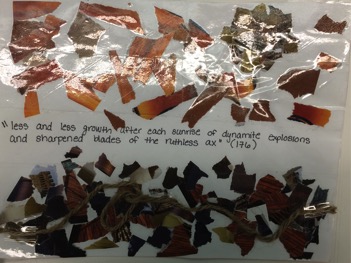 Through reading Engle’s novel, I now have a completely different outlook on the history of the Panama Canal, which, I believe, is a great testament to the discrimination of knowledge that characterizes our country’s history textbooks. Their writers prioritize certain historical events over others, those that they deem relevant and patriotic, those that will not hurt the reputation of our nation. Because of this, history textbooks do not tell of how the Panama Canal negatively affected the lives of the native and islander peoples and upheld racist, Eurocentric ideologies. By disregarding the histories of marginalized groups, such as those told by Mateo, Henry, and Anita in Silver People, our schools are doing a disservice to students and perpetuating systems of inequality. Thus, I see Silver People as a valuable counterstory founded in Critical Race Theory (CRT) in that it challenges the dominant perspectives on the construction of the Panama Canal and values the experiential knowledge of marginalized groups (Delgado Bernal, 2002, p. 109). In addition, because it reveals the lived experiences of the natives of Panama and Cuba with whom many students may relate, it is a great novel through which to employ critical content analysis using a CRT lens and with which to lead students in a discussion about racism and power and how they manifest in society. Such discussions have the potential to promote intercultural understanding necessary for the creation of a more just society; one in which children and youth see themselves as protagonist of such efforts.