STORY in Storying Studio stands as a verb as well as a noun. In addition to being a narrative, story/storying as verbs mean to compose by weaving together meanings in writing and art as in picturebooks. Children don’t write and illustrate; rather, they story. Story as a verb refers to the multimodal process of composing meaning in writing and art. 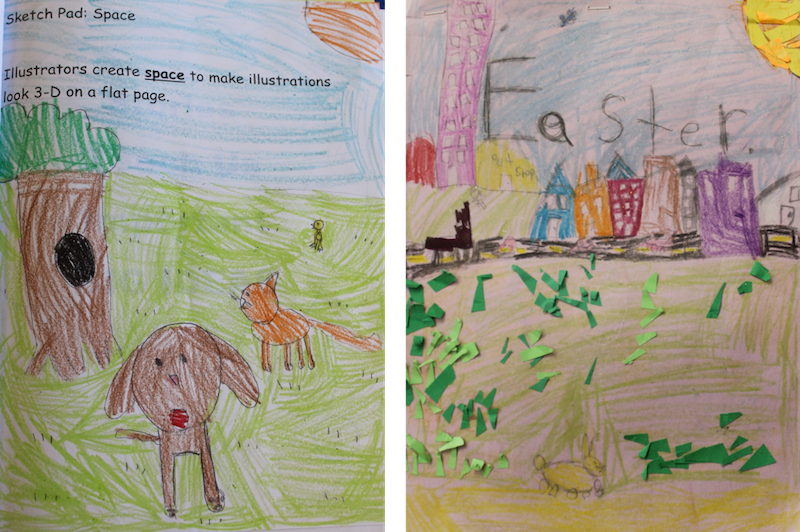 When children STORY in Storying Studio, they utilize what they’ve learned in minilessons to compose their own picturebooks. Figure 1 is an example from Marcie. On a page from her Sketch Pad, on the left of Figure 1, she uses the art element of space during EXPLORE. Space refers to how artists add depth and give a “3-D” effect on a two-dimensional surface. Marcie uses foreground, middle ground, and background; proportional change in the size of the animals; and, overlapping of the tree on the ground.

The right side of Figure 1 shows the cover of a book titled “Easter” that she wrote during STORY. In explaining her cover, Marcie says, “The grass is like the first ground, the city is like the middle ground, and the little bird is the background. I made the bird farther away and it is tiny and in the illustration it doesn’t really pop out. I made the grass like this because I wanted it to be popping out.”

We have found that Storying Studio values learners’ stories and voices; encourages multiple means of, and perspectives on, making meaning; and provides opportunities for learners to experience being literate cultural beings in our world, bounded only by the limits of their own imaginations. Through Storying Studio, children invent themselves and their identities as meaning makers, grow in their understandings of how to represent meanings in nonlinear as well as linear ways, and continually outgrow themselves and their understandings as they explore countless possibilities for making meaning. We continue to pursue the exciting experience of STORY in Storying Studio.