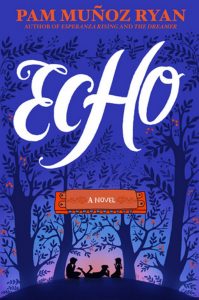 Echo by Pam Muñoz Ryan is a poignant story about the journey of a magical mouth harp (harmonica) through time and space. The masterful enmeshing of timeless fairytale and historical reality binds this powerful text into a strong narrative that highlights world events, prejudice, and social class distinctions. It all begins with Otto, who gets lost in a jungle where three sisters, bound by a witch’s curse, find him. Otto promises to break the curse by taking the harmonica out to the world. The harmonica, through its magical music, tangibly joins three children separated by place, which lifts the curse, freeing the three sisters.

Friedrich is a disfigured outcast in Nazi Germany; Mike is a disadvantaged orphan in Pennsylvania during the Great Depression; and Ivy is a wandering farmer’s child in California during World War II. Through perseverance and faith in goodness, the children separated by place overcome insurmountable odds and unite in a dramatic concert at the New York Carnegie Hall. The text, beautifully crafted and written by Ryan, includes realistic and approachable characters that pull the audience into the story.

The magical journey of the harmonica through time and space allows a portrayal of multiple themes. The theme of Struggle for Survival is evident as these three children separated by place join together through a shared love of music and responsibility. The characters portray the theme of Take Action as they better their lots to come out victorious in defeating the negative situations in which they are imbedded. Music joins the characters from Past to Present to captivate the audience. The ending brings the adventure together by breaking the spell that binds the three sisters together through the magical harmonica. Taking a closer look at each of the themes as part of further investigation is imperative. Interactions with this book should inspire a voice to start global conversations where readers can think as global citizens.

Each interaction with Echo should bring to light the various cultures the author exposes to the audience. These interactions will become a door that invites us into a distinctive world that explores similarities not differences. To increase critical thinking skills, Prejudice and Social Class Distinctions need to be emphasized as the audience reads this book in-depth. One can invite and encourage readers to learn more about the impact of WWII on the different regions of the world beginning with the students themselves and where they live. To start this process, consider one of these ideas:

• Introduce WWII, European/Jewish holocaust, Mexican immigration to the U.S. and The Great Depression through online searches. Gather resources to create ‘Jackdaws’ (a term for collections that provide the background for literature project, named after the bird) on the specific historical events. Connect WWI and WWII to present day and the War on Terror. Compare and contrast the wars and their impacts. Research to see who is suffering and who is not and whose voice is heard and who is being silenced.

• Study the ongoing struggle between Israelis and Palestinians through looking at various resources.

• Study fairytales. Let students research their base (i.e., where they stem from) to observe how oral traditions alter and change through the years.

• Study the magic of harmonicas. Bring in the musical instrument and let kids experiment with it.

Marilyn Carpenter and Holly Johnson use Echo to look at Depictions of Strong Women in Children’s and Adolescent Literature in November 2015 My Take/Your Take.