One way children can make a connection between history and their own lives is through storytelling that emphasizes self-image and the foundations of self-knowledge of one’s own people. The stories of indigenous people, past and present, are important because one must understand the larger context of life to gain perspective on personal experiences. 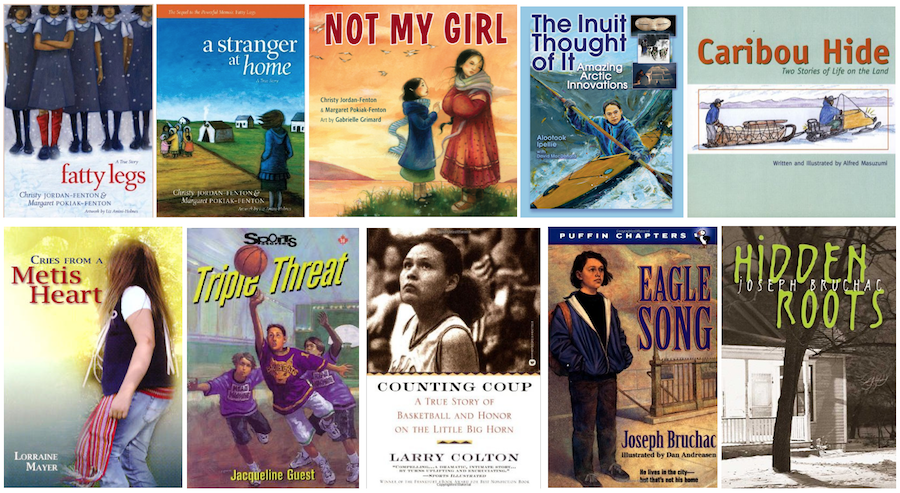 To gain this understanding of perspectives, we must overcome the voicelessness imposed upon generations of Native Americans and draw from deep within ourselves to contemplate our existence, pondering our origin as well as who we are. We must do this both as a cultural group as well as interconnected, yet unique, individuals.

The following books tell stories of indigenous children learning about who they are, where they come from, their history, and the relationships and responsibilities that support them as foundations of self-knowledge.

Authors: Christy Jordan-Fenton and Margaret Pokiak-Fenton
Illustrator: Liz Amini-Holmes
Title: Fatty Legs
Margaret Pokiak wants to learn to read, even though it means leaving her home in the high Artic. Though her father agrees to let her make the 5-day journey to attend school, he warns 8-year-old Margaret of the terrors of residential schools. At school, Margaret encounters the Raven, a nun whose physical form is as foreboding as a raven’s and who makes it a mission to humiliate the strong-willed girl. Margaret refuses to be intimidated and, in the end, gives the Raven a lesson in the power of human dignity.

Authors: Christy Jordan-Fenton and Margaret Pokiak-Fenton
Title: A Stranger at Home
Coming ashore to reunite with her family in the Arctic, 10-year-old Margaret spots her family. Her mother barely recognizes her and yells, “Not my girl!” Margaret is marked as an outsider who has forgotten the language and stories of her people. Still, Margaret relearns her family’s ways and remains true to her people and to herself because of her strong foundations of self-knowledge.

Authors: Christy Jordan-Fenton and Margaret Pokiak-Fenton
Illustrator: Gabrielle Grimard
Title: Not My Girl
Based on the true story of Margaret Poktak-Fenton, Not my Girl is a sequel to the picture book When I Was Eight and makes the award-winning memoir A Stranger at Home accessible to younger children.

Author: Alootook Ipellie with David MacDonald
Title: The Inuit Thought of It
While modern Arctic communities are comfortable, the Inuit survived in this harsh landscape for hundreds of years using only what the land and their own creativity afforded them. This book explores more than 40 Inuit innovations–from how they were made to their impact on contemporary culture.

Author: Alfred Masuzumi
Title: Caribou Hide: Two Stories of Life on the Land
Two illustrated stories provide a glimpse into the environmental ethics, conservation, and harvesting strategies of the Dene hunting lifestyle. The stories exemplify how the Dene see humans as a part of the environment.

Author: Lorraine Mayer
Title: Cries from a Metis Heart
Lorraine Mayer explores life’s paradoxes as she seeks personal recognition as a Metis woman even as the Metis people seek recognition for the tribe.

Author: Jacqueline Guest
Title: Triple Threat
This American Indian Youth Literature Award-winning book is as action-packed as the game of basketball is itself. Mathew Eagletail enjoys his summer visit with online friend John Salton. Both boys are basketball fans and John dreams of being the first coach in the NBA to use a wheelchair. The friends put a team together for the upcoming Rocky Mountain Summer Basketball League in Calgary–as does Matt’s arch-rival, John Beal.

Author: Larry Colton
Title: Counting Coup
Larry Colton follows a young Crow woman from Montana named Sharon LaForge, who is a gifted high school basketball player and a descendant of one of George Armstrong Custer’s Indian scouts. Counting Coup not only documents LaForge’s personal and sporting life, it reveals systemic obstacles in the path of those on the reservation looking to improve conditions for future generations.

Author: Joseph Bruchac
Title: Eagle Song
Danny Bigtree’s family has moved to a new city where he doesn’t fit in. Even worse, what makes him most proud, his Mowhawk heritage, is what the other kids tease him about. Homesick and facing prejudice, he searches for the courage to stand up for himself.

Author: Joseph Bruchac
Title: Hidden Roots
It’s is the 1960s and Harold is friendless, his mother is a loner and his father’s work at the paper mill makes him angry. Even darker secrets lurk in his family history, which take roots in the 1930s Native American sterilization program known as the Vermont Eugenics Program. This story gives readers insight into the loss of identity, history and culture — the foundations of self-knowledge — that Abenaki people still struggle with today.