Designed for Indigenous people, Coyote represents many different characters or things; not one of them is cute. Coyote is a trickster and all trickster figures are more or less human in Native American literature. Besides being such a fool, Coyote is a supernatural being. While the supernatural powers do not necessarily appear in every story, that background knowledge affirms the Coyote stories. We tend to laugh at many of the messes he gets himself into but we also know what he is capable of. In different ways, his characteristics frequently portray some of our worst human aspects. For him “good” and “evil” are not opposites, but represent a continuum. 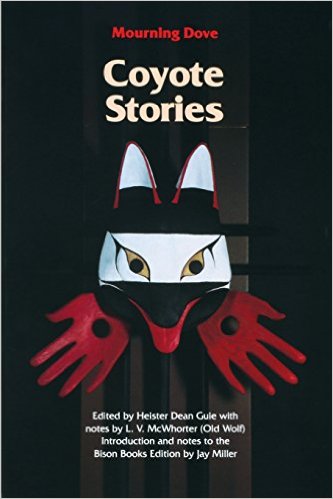 In the Apache culture, Coyote is wise and also a troublemaker who wants to be a part of everything. In most stories, he ends up making a fool of himself. For us, Coyote is not just more than we care to say, he is more than we can say. In Apache stories, Coyote steals fire so his stories are only told in the winter. Therefore, we are not supposed to tell Coyote stories before the first frost or after the first thunder. There are even storytellers who will not tell Coyote stories at all. With some of the stories in this post, Coyote is essentially untranslatable.

Author: Mourning Dove/Humishuma (Okanagan)
Illustrator: Heister Dean Guie
Title: Coyote Stories
In this book, Coyote teaches us how not to behave. He is preparing a world that is ready to introduce human beings. Readers follow him through the beginning of his power on “Naming Day” and into his journey along the Arrow Tail to the sky world. Humishuma’s stories, handed down from her people and written with charm and humor, tell the stories of other animals and Coyote’s essential role in the world.

Author: Kootenai Culture Committee, Confederated Salish and Kootenai Tribes
Illustrations by: Tony Sandoval, Alameda Addison and Andy Woodcock
Title: Coyote Stories of the Montana Salish Indians
This book includes three stories with Coyote at the center paired with ink drawings, all by members of the Salish Indian tribe. Coyote forgets to eat and drink in “Coyote Gets Lovesick” and does not want to share because of his greed in “Coyote’s Dry Meat Turns into Live Deer.” Both stories are told by Pete Beayerhead. In “Coyote and Raven,” as told by Eneas Pierre, hungry Coyote tricks Raven into dropping the grease he is carrying.

Editors: Robert Roessel and Dillon Platero (Diné)
Illustrator: George Mitchell
Title: Coyote Stories of the Navajo People
These 14 stories about Coyote, originally prepared at Rough Rock Community School in Chinle, Arizona, have been enhanced by full-color drawing. You’d think Coyote would learn, but he never does, which leads to funny stories in this collection. Because these are stories that have been honed in the telling over and over again for many centuries, there has been no compulsion to explain or elaborate unnecessarily. 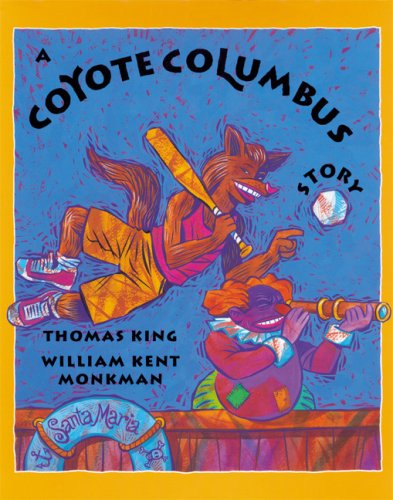 Author: Thomas King (Cherokee)
Illustrator: William Kent Moneyman (Cree)
Title: A Coyote Columbus Story
The only story of its kind, A Coyote Columbus Story is the only children’s book about the Columbus “encounter” written from a Native perspective. Including zany and satirical illustrations, this vibrant book has a very sharp message. Because Coyote always thought about playing ball rather than concentrating on the things she was creating, some things she created were awful. “She made rainbows and flowers and clouds and rivers. And she made prune juice and afternoon naps and toe-nail polish and television commercials. Some of these things were pretty good, and some of these things were foolish.”

Author: Thomas King
Illustrator: Gary Clement
Title: A Coyote Solstice Tale
Coyote throws a festive solstice party in the woods for his friends when suddenly a girl comes passes through. She takes the party-goers out of the woods and to the mall, which is a place that the animals have never been to. Coyote happily fills his shopping cart with goodies, but soon learns that he cannot have the goodies unless he pays for them. Paired with watercolor illustrations, this book is fun and witty.

Author: Marty Kreipe de Montañ
Illustrator: Tom Coffin
Title: Coyote in Love with a Star
In this modern adaptation of a traditional Potawatomi tale, Coyote leaves the reservation and heads for New York City, where he secures a job as a rodent control officer at the World Trade Center. Lonely for home and looking for an escape from the noise of the city, he goes up to the observation deck for some solitude and becomes smitten with a star in the night sky. 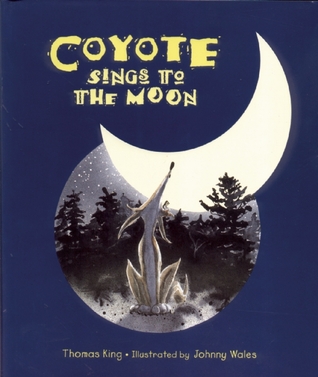 Author: Thomas King (Cherokee)
Illustrator: Johnny Wales
Title: Coyote Sings to the Moon
This book is an original story, not a traditional tale, by Thomas King, illustrated by Johnny Wales. Coyote wants to join Old Woman and the animals in singing to the moon, but the animals insult Coyote’s atrocious singing voice. Upset, Coyote turns and insults Moon, who packs her bags and slides out of the sky, diving down into the pond to plays chess with the sunfish. Old Woman and the animals try to get her back up to the sky, so Old Woman hatches a plan. Coyote wants to help again, and a funny tale ensues.

Author/Illustrator: Peter Blue Cloud/Aroniawenrate (Mohawk)
Title: Elderberry Flute Song: Contemporary Coyote Tales
This collection of over 50 poems and stories show Coyotes as comical, amoral, and obscene (as Coyote is). They follow him as he howls and creates daylight, makes snap decisions and loses what means the most to him, and even as he discusses relativity. The stories are fun, make readers take a look at the deeper meaning, and they are paired with ink drawings that showcase Coyote’s smile signature (or sneer?).

Author/Translator: Father Berard Haile, O.F.M.
Title: Navajo Coyote Tales: The Curly Tó Aheedlíinii Version
These 17 stories featuring Coyote were collected and translated by Father Berard Haile, O.F.M., over half a century ago. Coyotes is depicted as a trickster, a thief, a warrior, a shaman, and as the force of life. His adventures cause laughter and awe, depending on the shape he takes. Included in the book are the original Navajo transcriptions, along with notes.

Author/Illustrator: Shonto Begay (Dine’)
Title: Ma’ii and Cousin Horned Toad: A Traditional Navajo Story
In this traditional story, Ma’ii, the mischievous Coyote known to the Navajo, wants to eat all of hard-working Horned Toad’s corn. Ma’ii thinks of a way to trick Horned Toad and swallow him, but his plan backfires when Horned Toad gets cozy in his new home. The illustrations and the story are perfect for reading aloud. 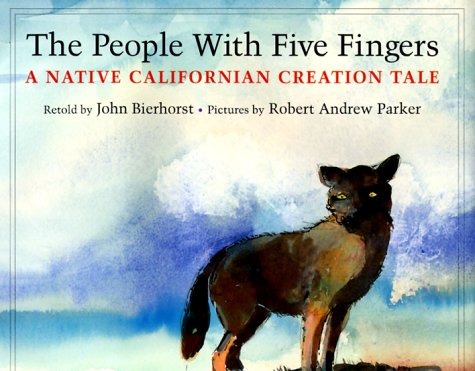 Author: John Bierhorst
Illustrator: Robert Andrew Parker
Title: The People With Five Fingers: A Native California Creation Tale
In this story, Coyote as Creator decides to make people, since “this earth cannot stay naked.” So he recruits the help of the animals, who assist him and make mountains, valleys, rivers and creeks, willows, bushes and plants, roots, berries, and all kind of food. Then Coyote dreams and places the sun, moon, and stars. And when he lastly creates people, all the animals, frightened of the noise, leave. But the people are here, and they are all different except that they have five fingers.