Christina Igoa, in her book The Inner World of the Immigrant Child (1995), documents her years of teaching in a California classroom designed to support children in their acquisition of English. In order to help that process, she acquired an extensive classroom library and immersed her students in English language texts. She particularly focused on collecting stories that had strong characters who overcame obstacles. 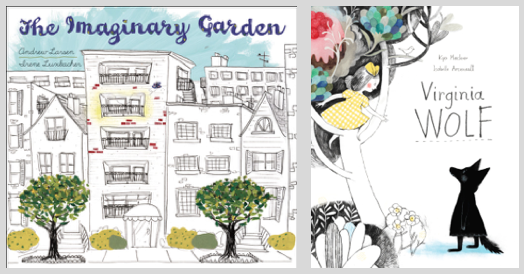 Her theory was that immigrant children, particularly those who were refugees, would have experienced many events that were out of their control. Hearing stories that demonstrated strong characters taking action would be important for children who were still processing their own traumatic experiences. She included fairy tales and legends in her collection of agentive narratives because the characters still took action, even if some of it was through magic. As children read stories of strong characters conquering powerful animals or supernatural creatures, those who felt alone and powerless were able to gain a sense that they could prevail over their environment.

Peter Johnston, in his book Choice Words, also discusses the importance of children gaining a sense of agency. Instead of feeling helpless, children who believe the environment responds to their actions develop confidence and the view that they are the kind of people who accomplish things.

One of my favorite bilingual stories illustrates Johnston’s point. In René Has Two Last Names / René tiene dos apellidos by René Colato Laínez (El Salvador), René is a newly arrived immigrant. When his teacher corrects his papers and removes one of his last names, René goes into action. He brings a family tree to school and gives a presentation profiling both sets of grandparents and what characteristics they have passed down to him. He then explains that without both “stories” his identity has a hole and is incomplete. The teacher decides he can keep both names on his papers!

Two new publications also show strong characters taking action, this time through paint, although in very different circumstances. In The Imaginary Garden by Andrew Larsen and Irene Luxbacher (Canada), Theo wants to help her grandfather (Poppa) adjust to his move from a home with a garden to an upper floor apartment. Together they place a large canvas on the balcony and paint an imaginary garden in which they can sit and enjoy color and time together.

In Virginia Wolf by Kyo Maclear and Isabelle Arsenault (Canada), Vanessa wants to help her younger sister Virginia climb out of the depression that is making her feel “wolfish” and is impacting the mood of the household: “The whole house sank. Up became down. Bright became dim. Glad became gloom.” When Vanessa listens to Virginia describing her moods along with her dreams about a place called Bloomsberry, she gets out her paints and creates the world her sister described. Trees and flowers spill across the bedroom wall. She includes a ladder and a swing that can help Virginia climb out of “down to up.” When Virginia wakes up, the garden works its magic, and her world begins to turn around. Together they finish the painting and head out to play. Based on the relationship between sisters Vanessa Bell and Virginia Woolf, the narrative is lyrical, and the artwork stunning as artist Vanessa works to help her sister climb out of the depression that occurred throughout her life.

The Streets are Free by Kurusa and Monika Doppert (Kurusa is the pseudonym of a Venezuelan anthropologist and editor and Doppert is from Germany) is a translated book that tells the story of children from the San Jose barrio in Caracas, Venezuela. When there is no place to play, they organize themselves with help from the local librarian and present their idea for a playground on a vacant lot to the mayor. After empty promises from the mayor and the city engineer go nowhere, the children again organize themselves and the barrio families and use scraps of lumber and found materials to construct their dreamed-of playground. 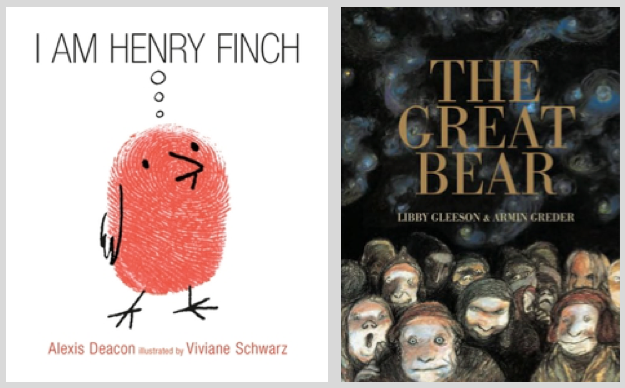 As you read this blog post you may notice titles that feature anthropomorphic characters. In a Language Arts article, Carolyn Burke and Joby Copenhaver (2004) described the role of books with animal characters, arguing that sometimes animals make tough issues easier to discuss. It puts distance between the events and the reader, allowing readers to critically explore things that could be uncomfortable if presented more directly.

One such story, I am Henry Finch by Alexis Deacon and Viviane Schwarz (England), features Henry, a small finch who gets eaten by a beast. As he sits thinking in the bottom of the beast’s stomach, he decides to take action and begins sending thoughts to the beast who responds and opens his mouth. Henry and his fellow victims escape, and the beast goes off to feast on food with spare parts (i.e. vegetables). This book is interesting as a portrayal of agency, but it also portrays the beast as a predator who is trying to feed his family. In other words, the predator is not all bad.

Another book that portrays animals taking action to improve their circumstances is The Great Bear by Libby Gleeson and Armin Greeder (Australia). Set in medieval times, a traveling circus arrives in a village and begins to perform in the square. When it is the bear’s turn, instead of dancing as he normally does, he responds to the prods with sticks and the stones thrown at him with a mighty ROAR. The villagers back off, giving him space to escape and climb to the top of a pole where he leaps into the sky and becomes the well-known constellation, Ursa Major. Done with pencil in Greeder’s minimalist style, the story portrays the power of an oppressed animal suddenly taking action and rebelling against his lot.

There are many other powerful stories featuring animals that portray agency that I have read with children, youth, and adult learners. Some of these have been discussed in previous WOW Currents posts:

– Fox by Margaret Wild and Ron Brooks (Australia) is a story of friendship and trickery as a fox coerces a one-winged magpie into abandoning her friend the partially blind dog to start out on an adventure across a desert, only to be abandoned in the hot dry landscape. It is also a story of the strong bonds of friendship that enable a disabled magpie to hop across a desert in order to return to the dog who depends on her for friendship and sight.

– Scaredy Squirrel by Melanie Watt (Canada) is a hilarious story of a squirrel who follows a strict daily routine in order to stave his fear of dangerous creatures (such as sharks, killer bees and poison ivy). His fears are challenged when he falls out of the tree, only to discover he is a flying squirrel. He then modifies his routine to include a daily leap into the unknown.

– Guji Guji by Chih-Yuan Chen (Taiwan) is a story about a crocodile adopted by Mama Duck before hatching. When cornered by crocodiles who want to feast on his duck mother and siblings, Guji Guji uses trickery to save his family and rid himself of the bullying reptiles.

Stories with strong characters like the ones profiled above can be a wonderful means of thinking about life situations. Agentive narratives encourage readers to think of possible alternatives and other scenarios. Next week, the final post in this series will focus on stories that can give readers who have experienced trauma the time and space they need to withdraw and rest.