Manga translates literally to “whimsical pictures” and are Japanese comic books (Bonser, 2017, p. 201). Manga was originally published in Japan and then republished in other countries, including the U.S. A dive into manga history shows that it is rooted in Japan’s long tradition of sequential arts, dating back to the Middle Ages when Bishop Tuba, a Buddhist priest, drew caricatures of his fellow priests (Schodt, 1996), which is considered a forerunner of manga. Katsushika Hokusai, a ukiyo-e (floating world picture) woodblock printmaker, coined the word “manga” and Hokusai Manga, containing assorted drawings from Hokusai’s sketchbooks, was published in the early 19th century (see Figure 1). Later on, “manga” was used in reference to a storytelling-style of book by Rakuten Kitazawa, a manga artist known as the founding father of modern manga (see Figure 2). 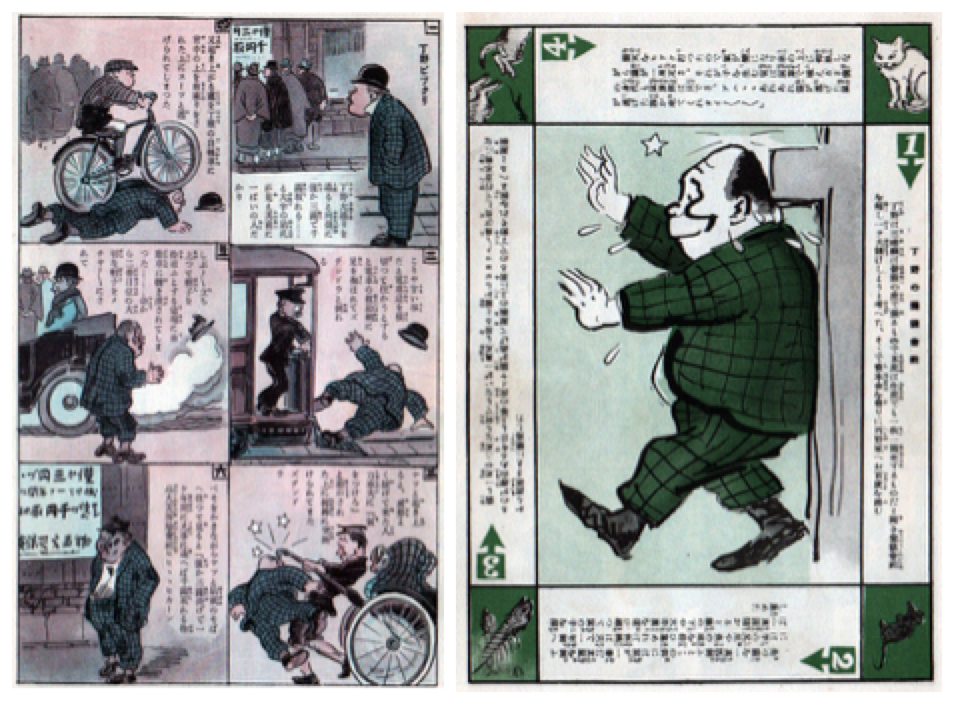 The God of Manga: Tezuka Osamu

In the 1940s, items of western culture such as films and comics were introduced to Japan. Manga history owes much to Osamu Tezuka, a manga artist, cartoonist, animator, film producer, medical doctor and activist and was greatly influenced by western popular cultures and began to introduce western aesthetic elements and artistic styles into his manga works (Ban, Schodt, & Tezuka Productions, 2016; McCarthy, Tezuka, & Otomo, 2009). He created more than 700 manga volumes in the 1950s with themes of social, political and cultural issues such as anti-war, preservation of nature, anti-discrimination, etc. He was also the godfather of Japanese anime and created over 500 anime episodes, and he still inspires many manga/anime artists and readers in Japan. One of his major manga is Tetsuwan Atom (1952), the science fiction story about a robotic boy with human emotions. It went on air with the title Astro Boy in the U.S. in 2009, and an English version of the manga is available as well. Black Jack (1973), the story of a medical doctor, and Hi no Tori (Phoenix) (1967), a story about life and death, are also regarded as his masterpieces. These have been republished a number of times and continue to be very popular among children, youth and adults today in Japan. They recently became available in the U.S. with English translations. Osamu Tezuka’s works popularized and significantly impacted the pop culture industry in Korea and influenced manhwa cultures. You can learn more about Tezuka Osamu on his website here.

In western countries, manga is largely divided into two categories: children and youth/adult. In Japan, manga is generally divided into five spheres according to the target audiences’ gender and age: jido (children’s), shonen (boys’), shojo (girls’), seinen (adult men’s), and young reddisu komikku (women’s) (Natsume & Takeuchi, 2009). The categorization affects characterizations, settings and narratives. Korea has similar target audiences in the manga world. Yet reader’s choice is beyond such classification. Japanese children read manga based on their interests, regardless of age and gender. Manga culture in Korea recently transformed into online Webtoons, which have broadened audience groups beyond specific target audiences. Age groups or grad levels do not decide what web-users read, but web-users decide what they like to read in Webtoon worlds.

In Japan, a number of studies have been conducted in the field of childhood culture and children’s literacy education since children’s manga is considered an important part of the childhood reading experience (Akashi, 2004; Kawaura, 1984; Nakazawa & Nakazawa, 1993). Here, we list popular children’s, boys’ and girls’ manga in Japan, which are also available in English. You can also get manga for kids from this site.

Kodansha, the Japanese publishing company, provides information about newly published manga in Japan and in the US. You can find more information on their website here.

The manga lists we share here tend to be contemporary realistic fiction. We also focus on historical fiction manga.

Children’s manga is directed towards both boys and girls. The stories focus on childhood cultures and experiences in a wide range of contexts such as homes, classrooms, schools, public libraries, parks, playgrounds, neighborhoods, streets, after school programs, etc. Peer culture, brother/sisterhood and children’s play and agency are often portrayed. Jido manga is the most recognizable and successful in the world, so the characters are part of a business that is very significant in the global pop-culture industry.

Manga and anime are often used interchangeably, and so we want to give a definition of anime. Anime is NOT synonymous with manga. Anime is a shortened form of animation originating in Japan and, like manga, has five categories: jido (children’s), shonen (boys’), shojo (girls’), seinen (adult men’s), and young reddisu komikku (women’s). Successful manga titles are often adapted into anime and distributed in theaters and as television broadcasts.

Doraemon (1969-1996) by Fujiko Fujio, Science Fiction: The story starts with Doraemon, a cat-like robot, who comes from the future to see Nobita. Doraemon was actually sent by Nobita’s great-grandson from the future to help Nobita, who struggles with his studies and is bullied by peers.

Ninja Baseball Kyuma (2009-present) by Shunshin Maeda, Fiction: Kyuma is a young ninja boy living in the mountains with his ninja dog. He joins a baseball player as a first ninja player.

Pokémon Adventures (1997-present) by Hidenori Kusaka, Mato and Satoshi Yamamoto, Science Fiction Fantasy: The story begins with Red, who gets a Pokédex (an electronic illustrated reference book device designed to catalog and provide information regarding the various species of Pokémon ) from Professor Oak. Red starts his Pokémon journey to battle gym leaders and collect the eight coveted badges.

Hamtaro (1997-2000) by Ritsuko Kawai, Animal Fantasy: The main character is an anthropomorphic hamster named Hamtaro. His owner is Haruko, a 10-year-old girl. Hamtaro has a variety of adventures with his hamster friends.

Boys’ manga targets young teen boys older than thirteen years (Kodansha Comics, n.d.). The main characters are male, and they are often heroes but sometimes not. Many stories are action and adventure oriented, taking place in fantasy, realistic or historical settings. Middle and high school boys’ daily life, as well as desirable professions such as medical doctors, artists, detectives and athletes and their agency are featured. Boy’s manga may have pretty or endearing book covers. Don’t assume automatically that they are not boys’ manga based on atypical look of “boys'” manga.

One Piece (1997-present) by Eiichiro Oda, Fantasy: This story takes readers on a journey with a young man named Monkey D. Luffy and a group of pirates. They explore the ocean in search of the legendary treasure, One Piece, to become the next Pirate King. This story presents various social issues related to war, territory and religion.

Slam Dunk (1996-1997) by Takehiko Inoue, Contemporary Realistic Fiction: The story is about a boy’s high school basketball team. It imparts to readers the importance of collaboration and communication in team sports. The boys grow physically and mentally by assisting one another in overcoming difficulties.

Case Closed (1994-present) by Gosho Aoyama, Contemporary realistic fiction: This is a detective story. Shinichi Kudo is a high school detective boy who sometimes works with the police to solve cases. He lives with his father, who is a private detective.

Naruto (1999-2014) by Masashi Kishimoto, Fantasy: This story is about Naruto Uzumaki, an adolescent ninja. He searches for recognition and dreams of becoming the Hokage, the leader of his village.

Your Lie in April (2011-2015) by Naoshi Arakawa, Contemporary
realistic fiction: Kasei was a piano prodigy until his mother died suddenly. He now lives in a colorless world without piano, and yet his life is changing since he meets Kaori, a violinist with an unorthodox style.

Yotsuba&! (2003-present) by Kiyohiko Azuma, Contemporary Realistic Fiction: The story portrays a five-year-old girl named Yotsuba who lives with her adoptive father in an urban city of Japan. She learns about the life and world around her with the support of her father, friends and neighbors. The author talks about Yotsuba&! here (2014).

Barakamon (2009-present) by Satsuki Yoshino, Contemporary Realistic Fiction: The story is about a young master calligrapher who dedicates his life to the art. He lives in a small island located in southern part of Japan, and there he builds his own art style through interacting with the islanders and natures.

A Silent Voice (2013-2014) by Yoshitoki Oima, Contemporary Realistic Fiction: Shoya is a bully boy. Shoko, who can’t hear, enters his elementary school class. She becomes his target and eventually she leaves the school. Six years later, the two meet again.

Girls’ manga targets young teen girls older than thirteen years (Kodansha Comics, n.d.). Most of the main characters are female, and they play various roles such as heroines, middle or high school girls, bullies or bullied, students at a new school, foster teens, etc. Romance, interpersonal relationships and peer cultures in fantasy or real-life settings are popular themes in these stories.

Boys over Flowers (1992-2003) by Yoko Kamio, Contemporary Realistic Fiction: This story portrays a girl’s high school experience. Tsukushi is bullied by upper-class peers. She struggles with emotional and physical hardships, and yet she overcomes with help from her family and friends.

Fruits Basket (1998-2006) by Natsuki Yakaya, Fantasy: This is one of top selling girls’ manga in the US. The story tells Tohru Honda’s life after she loses her mother in a car crash. She lives with her grandfather, yet he is unsupportive and she leaves his house. Tohru becomes homeless, living in a tent and supporting herself.

Nana (2000-2009) by Ai Yazawa, Contemporary Realistic Fiction: This story tells of the lives of two teenage girls, Nana Osaki and Nana Komatsu. The two Nanas come to Tokyo from different towns, become roommates and develop friendships. They have different dreams: Nana Osaki wants to become a singer and Nana Komatsu wants to have a happy life with her boyfriend.

Fushigi Yuugi (1992-1996) by Yuu Watase, Fantasy: At the library, two middle-school students, Miaka and Yui, find a book, “The Universe of the Four Gods”. Reading this book transports them into the book’s universe in ancient China.

Natsume’s Book of Friends (2005-present) by Yuki Midorikawa, Fantasy: The story portrays a boy named Takashi who has the ability to see spirits, inheriting the power from his grandmother. From one of his relatives, Takashi receives a special book, “Book of Friends”. Actually, it contains both good and malicious spirits. The good spirits always come to help him, but the malicious spirits try to kill him.

Kamisama Kiss (2008-2016) by Julietta Suzuki, Fantasy: Nanami, a high school girl, loses her home because her father is addicted to gambling and can’t pay rent anymore, and they are turned out of the apartment. She gets help from a boy who lives in a shrine, and she starts a new life there.

Kodansha Comics. (n.d.). An introduction to manga for librarians. Retrieved from https://kodanshacomics.com/wp-content/uploads/2016/01/KAM_OverDrive_GuidetoManga.pdf