Daniel Heath Justice’s new book Why Indigenous Literatures Matter is a marvelous look at the the critical issues within and surrounding Indigenous Literature in Canada and the United States. Justice, Colorado born Cherokee citizen, now also a Canadian citizen, holds the Canada Research Chair in Indigenous Literature and Expressive Culture at the University of British Columbia. The work is academic, but personal and poetic. It highlights contemporary Indigenous authors writing for adults and children and touches on fiction, poetry, personal essay, and memoir. 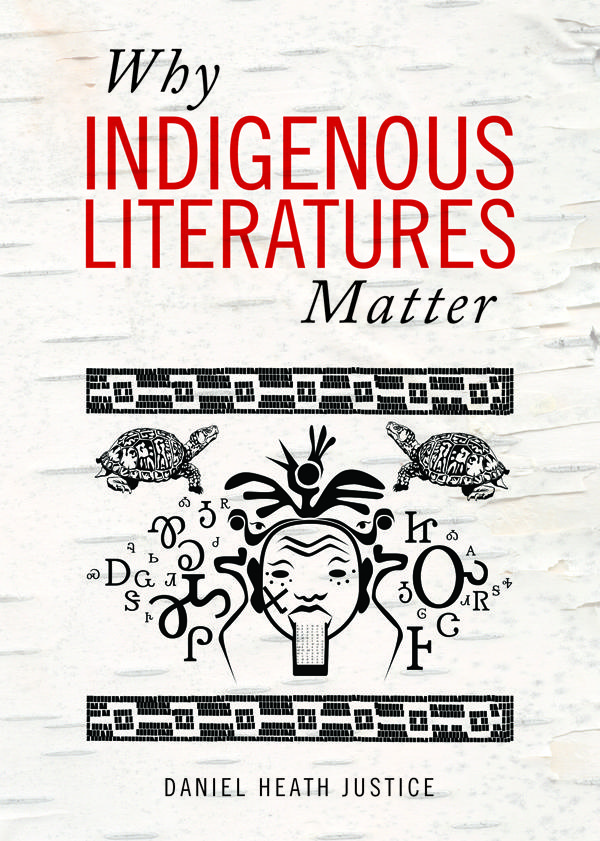 There are limits to my own understanding of Indigenous literature because of my settler colonialist perspective and education. Nevertheless, one of my primary objectives in reading, studying, discussing, and teaching Indigenous literatures for children is to advocate for an end to their absence from the canon and the curriculum. The effect of this advocacy needs to begin in childhood with infant and toddler board books, through elementary aged picture books and early chapter books, on to middle grade and young adult novels, and then onto books written with adults in mind. I bring up Why Indigenous Literatures Matter here because it’s important to think about Indigenous children’s literature as the beginning of a continuum of the story of Indigenous experiences in printed books.

I’d like to quote Justice at length here. Right at the beginning, after the preface, in the first two paragraphs of the introduction, Justice articulates the answer to the title question:

“There are many stories about Indigenous peoples alive in the world today. Some of these stories are our own. They give shape, substance, and purpose to our existence and help us understand how to uphold our responsibilities to one another and the rest of creation, especially in places and times so deeply affected by colonial fragmentation…Other stories are not so good. These are imposed upon us from outside. They belong to the colonizing populations that claim and dominate our homelands–populations from which many of us are also descended and with which we must navigate our complex relations as well. These stories are sometimes told with good intent. More often they’re not. Sometimes they’re incomplete rather than wrong, partial rather than pernicious. But sometimes the stories are noxious, bad medicine, and even when told with the best of motivations, they can’t help but poison both the speaker and the listener”(Justice, p2).

When choosing books for children, in my classroom or in my home, I want to be very sure that the stories I am advocating for are not poisoning the reader, but are offering a part of this infinite thread of stories that heal and uplift, even through difficulty. So, I read American Indians in Children’s Literature, and Cynsations, and as many other blogs and book reviews written by Indigenous readers as I can find. Stories shape our identities, our visions of how we fit into the past as well as how we, how children, might fit into and shape the future. What could be more important than that?

Justice mentions many books and Indigenous authors in the body of his text. Additionally, in the appendix, is the complete list from his Twitter project, A Year of #HonouringIndigenousWriters. Each day for a year, Justice tweeted the name of an Indigenous author, most from North America, but some from other continents. Most focused on writing for adults, but some were writers for children.

One of these writers is Metís author Cherie Dimaline. Since The Marrow Thieves was published in September, 2017, I have been returning again and again to this Kirkus Prize winning YA dystopian novel. In The Marrow Thieves, non-Indigenous people have lost the ability to dream, and psychiatry and other forms of settler medicine are unable to stop the ‘plague of madness’ (Dimaline, p53) following this inability. It was found that those with Indigenous heritage had not lost the ability to dream, and that dreaming is deeply connected to all around well-being. The residential school system has been recreated to abduct and incarcerate Indigenous individuals, harvesting their bone marrow, slaughtering them. 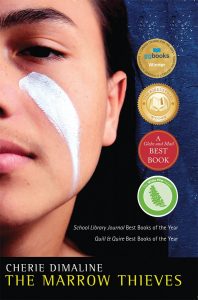 “We go to the schools and they leach the dreams from where our ancestors hid them, in the honeycombs of slushy marrow buried in our bones. And us? Well, we join our ancestors, hoping we left enough dreams behind for the next generation to stumble across”(Dimaline p90).

So, when the protagonist, Frenchie, and the group of characters of chosen and necessary kinship act in defiance of this new residential school/slaughter system, it is not only to enhance their own possibility of bodily survival, but as a collective action for Indigenous survival, to keep the Story going. The beginning of this survival is in knowing the stories of the past that were foundational for identity as well as existence. “We needed to remember Story…it was the only way to make the kinds of changes that were necessary to really survive”(Dimaline p25).

When we read Indigenous literature for children, we are remembering Story. Children are reminded that they already have the tool of imagination to take action, to make the changes necessary to survive, and thrive. Justice writes, “When apocalypse appears as an overt theme in Indigenous writing, it’s more than speculation-it’s experiential, even in its most fantastical, because in a very real way it hasn’t ended. Our nations are still subjected to the terrible traumas of colonialism…Our nations’ resistance continues, as does our hope that there’s a better world beyond the apocalypse. Our stories affirm this hope..(p 168).”

This hope is at the foundation of Indigenous children’s and young adult literature. That somehow, beyond the past and present atrocities, children will rise up and be a very large part of creating a better world. Dimaline’s work, Justice’s work, and the works of Indigenous authors across this continent and globally, are a vital part of this remembering, knowing, and rising up. Today, especially, this is a necessity.