The stories of Indigenous people reflect both the material and deeper aspects of our culture. These deeper aspects include traditions such as oral storytelling, considered a spiritual practice. Oral tradition is used to tell certain stories the way they should be told, with an impassioned audience and storyteller. These stories are defined as a body of literary works with standard procedures that have been preserved for many generations through performance. This structure helps listeners create awareness of their own cultural perspective. It’s important to understand the place of oral literature in Indigenous culture and to translate those stories into print so they can be shared. The weaving together of oral literacy with writing reveals unique features and values within many different cultures. This significance of the vocal and textual language is shown in several of this week’s suggested books that have been adapted from oral to print. Other books selected demonstrate culture, tradition, genocide, abuse and heroism, and help to honor the American Indian Experience. 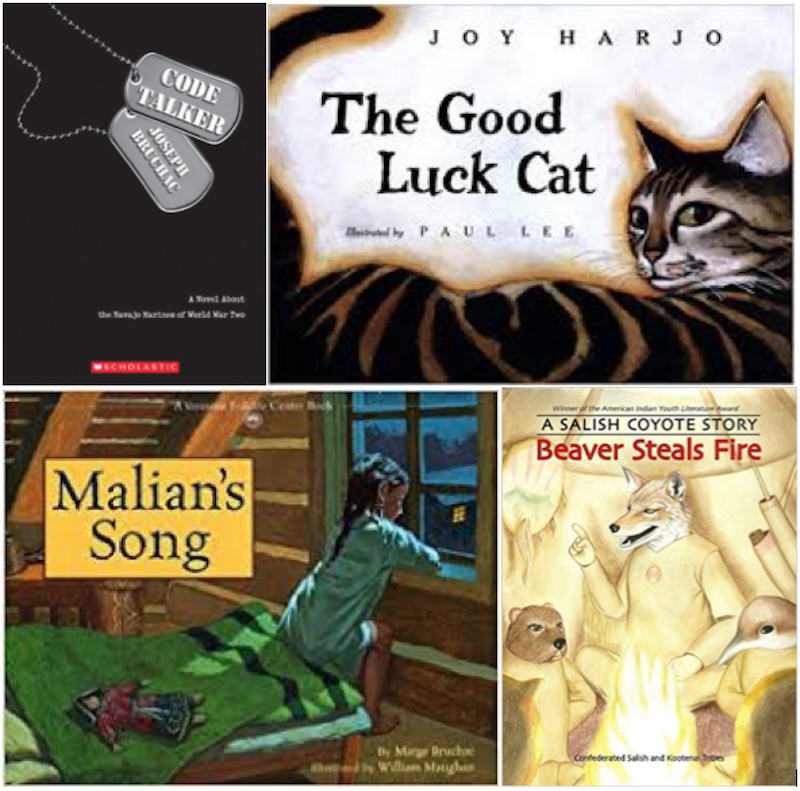 Proud To Be Métis by David Bouchard
This book features important Metis icons such as: the Red River Cart, Bison Hunt, square dance, specialty foods, hunting and trapping and much more.

Proud To Be Ojibwe
This book features important Ojibwe icons such as: wigwams, peaked lodges and tipis, the Great Plains, tikanagans, wild rice, the Powwow trail and much more.

Proud To Be Cree
This book features important Cree icons such as: wigwams and tipis, pemmican, spirit name, trapping, lean to huts, net fishing and much more.

Modern Treaties: Gym Wars
Our Modern Treaties Series shows young children an easily understood example of how two groups can be at an impasse and still be able to compromise on their situation. The Modern Treaties–Gym Wars shows how a Treaty Agreement can be made between two teams who can’t agree on who’s turn it is to use the gym.

Five Little Cubs
This is a great book to teach young children to count. Watch as the mother wolf looks for her five lost cubs in the traditional Native world.

Historical Genocide and Abuse
The following titles give clarity to the historical genocide and abuse that American Indians were subjected to at the hands of the settlers. It also documents the ways in which people, Indigenous or not, worked together to fight these injustices.

Malian’s Song by Marge Bruchac
Malian is an Abenaki girl during the mid 18th century and this is a fictionalized account of the true story of how the Abenaki people survived an attack by the English. Led by Major Robert Rogers, the siege destroyed their village. Their story was preserved through oral history and stands in direct contrast to Roger’s journal accounts.

The Birchbark House by Louise Erdrich.
This book teaches readers about the genocide of Native Americans through disease, specifically smallpox. It’s told through a young girl Omakayas, or Little Frog, who alone has survived as an infant. She is rescued by Old Tallow, a fearless woman who is part of the Ojibwe. Omakayas’ life is well described by Erdrich, including the different ways Native Americans lived during each season and the drama of getting along with “siblings.” But smallpox finds it’s way to the Ojibwe, and Omakayas is the only one not affected.

Soft Rain: A Story of the Cherokee Trail of Tears by Cornelia Cornelissen
In 1838, the Cherokee people were forced to relocate from North Carolina to the West. It is a long, dangerous journey, and Cornelissen portrays this vividly through the eyes of Soft Rain, a nine-year-old girl.

Crossing Bok Chitto: A Choctaw Tale of Friendship and Freedom by Tim Tingle, illustrated by Jeanne Rorex Bridges
This telling of history is during the days before the Trail of Tears, when the river Bok Chitto was a boundary separating the Choctaws from the Mississippi plantation owners. This river was the line between slavery and freedom. When Martha Tom, a young Choctaw, crosses the river in search of blackberries, she meets Little Mo, a young black slave who helps her find her way home. Their friendship continues as the years pass, with Martha Tom crossing Bok Chitto on her way to church and sitting with Little Mo’s family. When Little Mo’s mother is to be sold, Little Mo comes up with a plan. His family, with the help of the Choctaws, will cross to freedom.

Culture and Traditions
The following titles document modern American Indian life, and the ways in which Indigenous culture and traditions have survived through the ages.

We Are Grateful: Otsaliheliga by Traci Sorell, illustrated by Frank Lessac (forthcoming title)
The Cherokee community is grateful for the blessings and challenges that each season brings. This is modern Native American life as told by an enrolled citizen of the Cherokee Nation.

The Warriors by Joseph Bruchac
This book is for anyone who loves lacrosse, which was sacred to the Iroquois. Set in contemporary Washington D.C., Jake has left his Iroquois reservation and entered a boarding school. Lacrosse is the bridge that crosses both worlds for Jake, but is it enough?

The Good Luck Cat by Joy Harjo
This is a modern Native American story from a member of the Muskogee-Creek tribe about Woogie, a cat that seems to be testing the notion of 9 lives. Will the good luck cat’s good luck run out?

Jingle Dancer by Cynthia Leitich Smith
This is a gentle tale about a contemporary Native American girl who turns to her family for help. With their aid, she finds her dancing voice via rows of jingling ornaments on her special dance costume for the powwow. The author is a mixed-blood member of the Muscogee (Creek) Nation.

Beaver Steals Fire: A Salish Coyote Story  told by the Confederated Salish and Kootenai Tribes, illustrated by Sam Sandoval.
“This is a story that represents thousands of years of oral tradition. In Beaver Steals Fire, fire is a gift from the Creator brought by the animal beings for human beings who are yet to come,” (from Acknowledgements).

Heroism
This last book documents the heroic actions of the Navajo people in World War II.

Code Talker: A Novel about the Navajo Marines of World War Two by Joseph Bruchac
A gifted storyteller and descendant of the Abenaki people, Joseph Bruchac is a prolific author of more than 70 books that reflect his heritage. Code Talkers is about the Navajo Marines, the unsung heroes of World War II. The Navajos both developed an unbreakable code (all other codes were broken by the Japanese) and risked their lives in battle to transmit messages that used their native language.

All these pieces of Indigenous Children’s Literature are stories that inform and document the lives of people who do not have an equal voice. Important traditions survive through literature, which makes these books so important. I hope you give them a look!