Code Talker stories are important because of the significant impact Code Talkers had on World War II. Additionally, the portrayals of the Code Talkers in story empower the reality of our Navajo Heroes. This section, I would like to honor them. During the course of World War II, Diné (Navajo) code talkers were a crucial part of the U.S. strength in the South Pacific, sending and receiving messages in an unbreakable code based on the Diné language. As Marines, they took part in every assault, from Guadalcanal in 1942 to Okinawa in 1945, experiencing some of the bloodiest fighting in the war. For the Diné code talkers, the military experience of serving in World War II–mythologized as “the good fight”–was a chance for the young men to demonstrate their courage in the most exciting adventure of their lives. Descriptions of the following books are copied from the publishers’ websites unless otherwise noted. 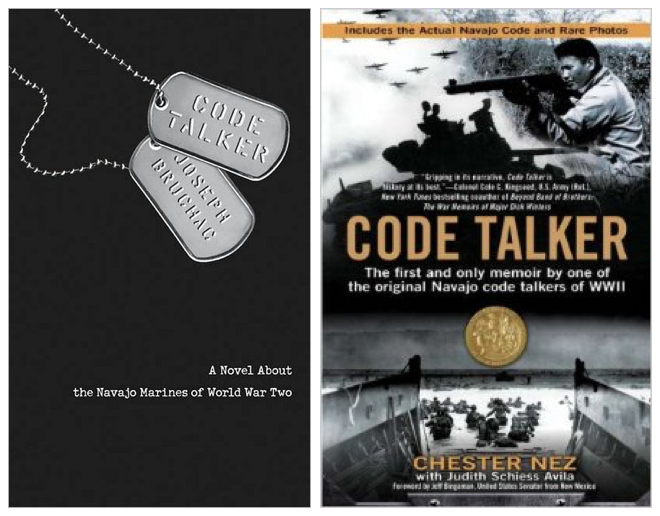 Code Talker, by Laura Tohe with photographs by Deborah O’Grady
Publisher: Rio Nuevo Books
Age Level: 14-16
The Navajo language helped win world War II, and it lives on in this book, as the Code Talkers remember the war and reflect on the aftermath and the legacy they will leave behind. The veterans, able to speak to a daughter of one of their own in English and Navajo, truly shared from their hearts. They not only provided more battlefield details, but they also reveal how their war experiences affected themselves and the following generations.

Code Talker: A Novel About the Navajo Marines of World War Two, by Joseph Bruchac
Publisher: Speak
Age Level: 14-16
Throughout World War II, in the conflict fought against Japan, Navajo code talkers were a crucial part of the U.S. effort, sending messages back and forth in an unbreakable code that used their native language. They braved some of the heaviest fighting of the war, and with their code, they saved countless American lives. Yet their story remained classified for more than twenty years. But now Joseph Bruchac brings their stories to life for young adults through the riveting fictional tale of Ned Begay, a sixteen-year-old Navajo boy who becomes a code talker. His grueling journey is eye-opening and inspiring. This deeply affecting novel honors all of those young men, like Ned, who dared to serve, and it honors the culture and language of the Navajo Indians. 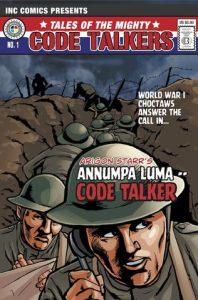 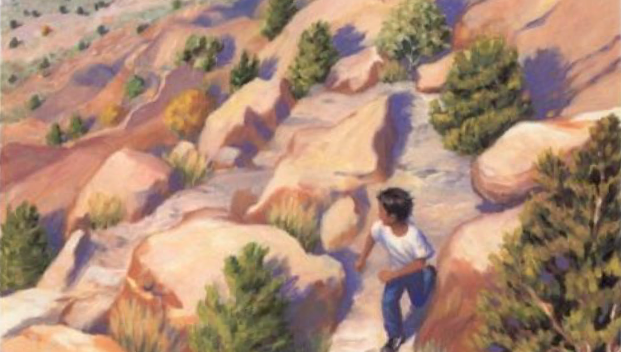 The Unbreakable Code, by Sara Hoagland Hunter with illustrations by Julia Miner
Publisher: Cooper Square Publishing Llc
Age Level: 6-9
This picture book follows John, a young Navajo boy who is moving to Minnesota with his mother and step-father. He does not want to leave, but his grandfather, a Navajo code talker of WWII, explains to him that the Navajo language will always tie him to his native land. (Description from WOW Currents.)

[Editor’s Note: Take a deeper dive into The Unbreakable Code with Worlds of Words.]

Chester Nez and the Unbreakable Code: A Navajo Code Talker’s Story, by Joseph Bruchac with illustrations by Liz Amini-Holmes
Publisher: Albert Whitman & Company
Age Level: 7-9
As a young Navajo boy, Chester Nez had to leave the reservation and attend boarding school, where he was taught that his native language and culture were useless. But Chester refused to give up his heritage. Years later, during World War II, Chester—and other Navajo men like him—was recruited by the US Marines to use the Navajo language to create an unbreakable military code. Suddenly the language he had been told to forget was needed to fight a war. This powerful picture book biography contains backmatter including a timeline and a portion of the Navajo code, and also depicts the life of an original Navajo code talker while capturing the importance of heritage.

Winds of Freedom: The Story of the Navajo Code Talkers of World War II, by Margaret T. Bixler
Publisher: Two Bytes Pub
Age Level: (not provided)
This book is an acclaimed account of the only undecipherable code that enabled the United States to win the war in the Pacific. Explores history. Many maps and photos. Includes declassified Navajo dictionary.

One thought on “Code Talker Stories”