The last two books to round out 2018 will also take us into 2019 since both are the first books of a series. And the best (or worst, depending on how you think about this) is they are fantastic adventures… that you will need to wait (impatiently if you are like me) for their second titles! Yet, while I call them fantastic, and they are, I really resisted reading both of these books because they are the first two in a series in which their companions are not available. When it comes to story, I am hard-pressed to delay gratification! The two books of which I speak are The Book of Dust (2017) by Philip Pullman and Children of Blood and Bone (2108) by Tomi Adeyemi. 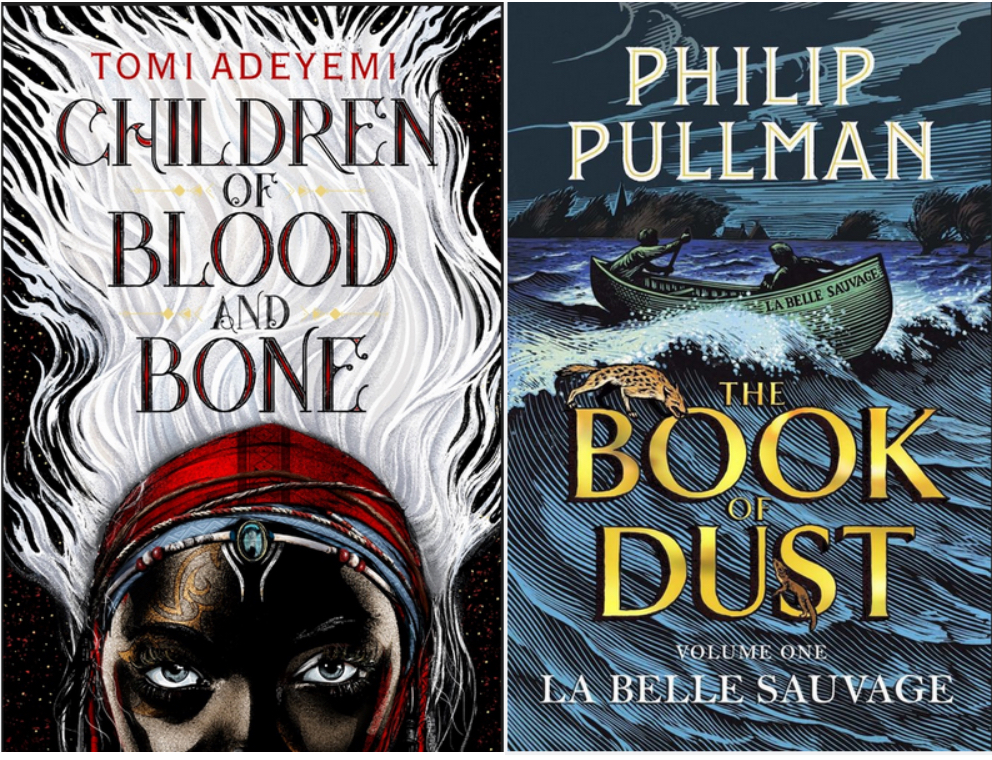 Fortunately, you may have a shorter waiting period for the next book in each series! But even as I say that, the mystery is when the second book of The Book of Dust series (actually called the La Belle Sauvage series) remains. The rumor has it that it is called The Secret Commonwealth and actually takes place 20 years after the events in The Book of Dust. Tied to the world of His Dark Materials, which I read like a house afire when that trilogy came out, I am chomping at the bit for the next book in this new series. To find out what happens to Lyra as a 20-year-old is a hook I cannot resist.

So, from what I have said, you are now probably getting the sense of what The Book of Dust might be about: Lyra as a baby and how she is hunted even as an infant. Let’s just say that Lyra is hidden away in a small village, and deeply loved by young Malcolm, an inn keeper’s son from across the river. Malcolm is smart, resourceful, and must get Lyra to safety at Jordan College once he realizes she is being hunted by forces that would bring her harm.

Like others, I was fearful of entering into this book because I had been so enamored with His Dark Materials. But, even after 17 years (seriously) since the end of His Dark Materials, Pullman brings readers right back and creates a story that, while connected to world introduced in The Golden Compass (1996) of His Dark Materials, stands on its own, especially with the addition of Malcolm, who is the young hero of this book. Just like his other works, Pullman creates a fantasy world that is easy to enter and hard to leave. I might just have to pick up the second book when it is available and put it away until the third is published. This story starts out just that good! I encourage you to go ahead and take the leap, read this first book, and maybe we can wait impatiently together.

The second book for this week is Tomi Adeyemi’s Children of Blood and Bone (Book I of the Legacy of Orïsha series) that presents Zêlie, a young girl with magi heritage in a kingdom where magic has been destroyed by a king fearful of its power. Zêlie is somewhat of an antihero in the respect that while she has a passion for justice, her fear and self-doubt along with a tendency to make decisions that could be considered problematic and even dangerous for others, thus jeopardizing her ability to accomplish what is needed to reignite magic in the world. I think this makes her more likable (but infuriating to her brother Tzain, who stands by her regardless of her fallibility).

What I especially liked about this book (and by extension, the series) is how it reflects current and historic sociopolitical conditions in connection to those who are not part of the dominant culture and their treatment. The parallels can make some really interesting discussions and new ways to think about the world. Adeyemi’s work would complement Nnedi Okorafor’s Akata Witch (2011) and Akata Warrior (2017), fantasies that can also be viewed through a sociopolitical lens. Both are of Nigerian descent, which plays strongly in their stories. The second book of this series, Children of Virtue and Vengeance is due out March, 2019 and the third book will arrive in 2020 according to the publisher.

So, I leave you at the end of 2018 with 12 terrific books to read over the slow, or cold, days of January and February. Look for WOW Recommends in the next couple of days, and perhaps we can all stay caught up for 2019. Maybe even make it a New Year’s Resolution? Hmmm, I think I just might. And, if you have a book you would recommend, pass it along! Are we always looking for great books to read?