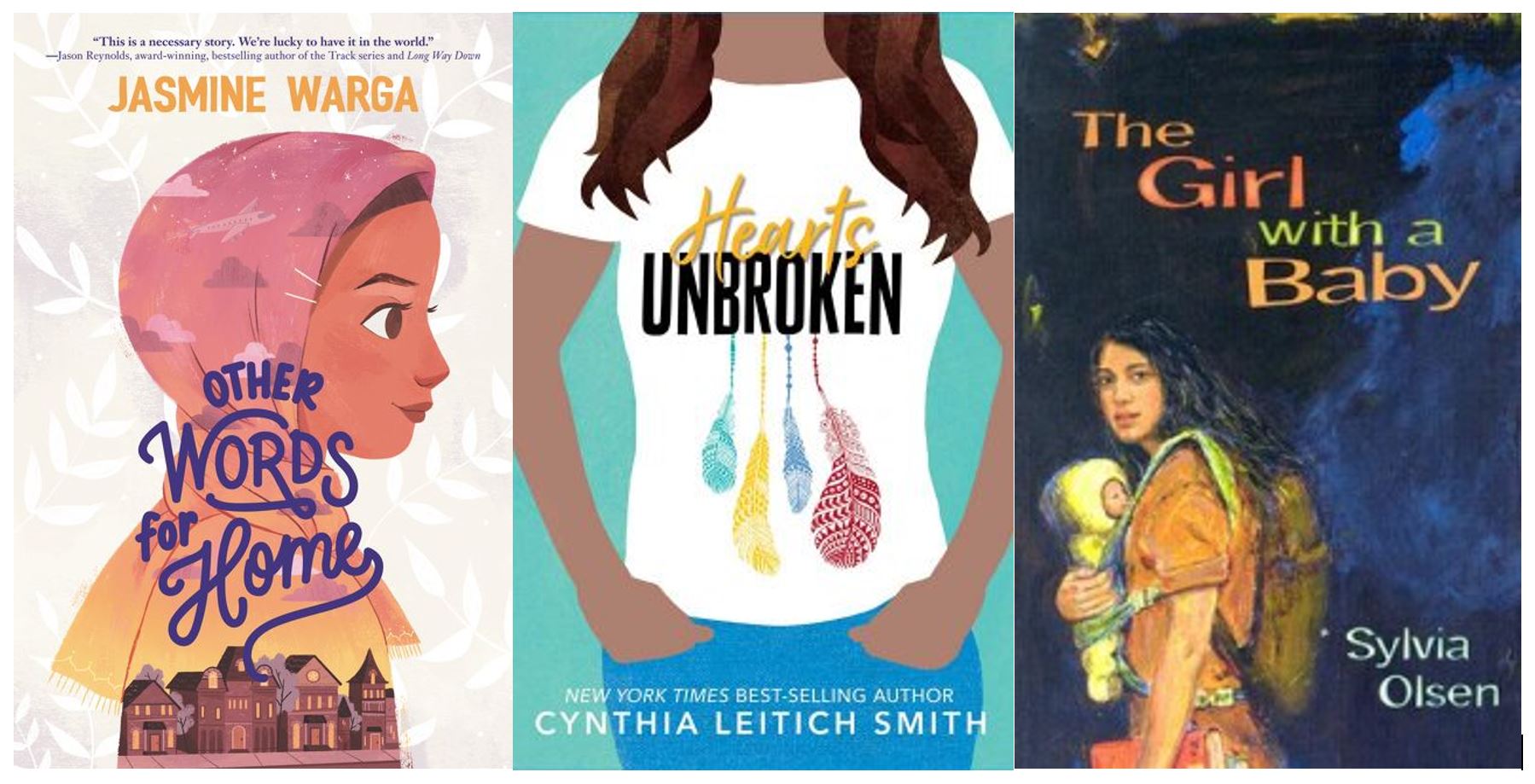 When Muskogee author Cynthia Leitich Smith’s most recent #OwnVoices book, Hearts Unbroken, came out in 2018, I was happy to read about the element of theater in the novel. Indeed, the novel discusses color conscious casting, theater as activism and the crimes of the canon. I was reminded of Sylvia Olsen’s 2003 novel, The Girl with a Baby, which centers around a First Nations teen mom who auditions and gets the lead role in the musical Grease, despite the hesitations of others because of her status as a parent and her indigeneity. However, because I wanted to focus on more recent novels, I decided not to write about Olsen’s novel and couldn’t decide on another novel to pair with Hearts Unbroken, until I read Jasmine Warga’s Other Words for Home.

Hearts Unbroken is the story of Lou, a Muscogee teen girl and senior in high school, who has just moved from Texas to Oklahoma, beginning the year at a new school. Lou’s younger brother, Hughie, tries out for a role in the school musical production of the Wizard of Oz by L. Frank Baum. He gets the role of the Tin Man, but there is public outcry because the actor cast as Dorothy is Black. A committee of parents calling themselves Parents Against Revisionist Theater are making a fuss thinking that white children were overlooked for parts because of the Theater teacher’s agenda. So when Lou starts her new role as a writer at the school paper, she decides to follow the story of the casting of the Wizard of Oz, and those against it, in addition to doing a story on students who work after school jobs.

Tensions regarding the “color conscious” or “color blind” casting of the play escalate, and Lou’s family receives threats and their house is vandalized. Lou eventually writes a powerful and personal op ed that is published in her school paper, and the comments that follow are supportive. So much of Lou’s internal crisis is her fear of speaking up and speaking out. Publishing this piece doesn’t solve the external issues, but for Lou, it is an enormous step in her personal development. Noticing the feelings surrounding the tensions and issues in her school and the larger world cause her to feel articulating them for herself isn’t enough. She needs to take action and write, and she needs to present her writing to the public.

In Hearts Unbroken, there is a rich discussion of the issue of separating the art from the artist. Cynthia has spoken publicly about her opinion that we should not separate the art from the artist. In the book, this issue centers around the historical opinions of L. Frank Baum, published in the Aberdeen Saturday Pioneer in 1890, where he advocates for “the total annihilation of the few remaining Indians … better that they die than live the miserable wretches that they are …. Our only safety depends upon the total extermination [sic] of the Indians. Having wronged them for centuries we had better, in order to protect our civilization, follow it up by one more wrong and wipe these untamed and untamable creates from the face of the earth,” ( p. 175-175).

The Theater teacher, progressive in other ways, said that Baum “was a man of his time, nobody cares anymore.” But Hughie, Lou’s brother, the Tin Man, cares. Lou cares, and Cynthia cares. This is a broader issue, but I can’t help but think this is also a way for Cynthia to process her feelings about Sherman Alexie in the context of a YA novel.

Additionally, she uses this novel as a plug for a couple of other Indigenous authors. On page 122, the librarian gives Hughie a copy of Eric Gansworth’s If I Ever Get Out of Here that wasn’t processed at the library yet. Later in the text, Lou mentions that she has Tim Tingle books on her bookshelf at home. Community shout outs at their best, so that if kids feel that they are lost without Alexie, this novel points to other amazing Indigenous male authors.

Jasmines Warga’s beautiful middle grade novel in verse, Other Words for Home tells the story of Jude and her family, as Jude and her pregnant mother leave Syria, leaving Jude’s father and brother behind, to escape the dangers of war. They move to Cincinnati to live with Jude’s uncle, his wife and his Syrian American daughter. Jude loves to sing, so two–thirds through the novel, when the opportunity arises to audition for her middle school production of Beauty and the Beast, she decides to be courageous and try for a part instead of becoming a member of the tech crew.

While Hearts Unbroken treatment of casting students of color and Indigenous students in roles people associate with white actors is mostly about skin color and culture, Warga, Jordanian–American, brings another layer to this discussion: language and religious diversity. Jude is an English Language Learner and speaks with an accent, still thinking and dreaming in Arabic. Additionally, during the course of this novel, she experiences menarche and begins wearing hijab. So her desire for a speaking role in the musical and the backlash against it, takes on additional significance. Jude’s cousin, Sarah, says she got the role of Plumette because that role is supposed to speak with a thick accent. She also said, however, that she thought Jude would not be allowed to wear her hijab because Plumette is supposed to be sexy. But Jude is still elated she got the part, even though she can’t stop wondering if others are thinking the same things Sarah is thinking.

I listened to the audiobook of Other Words for Home, and that helped me to more deeply understand Jude’s character. It helped me to hear the accent of the actor reading the novel. Indeed, it almost seems like an unstaged reading–a performance within a performance. In the middle of missing Syria, of worrying about her mother’s pregnancy and her brother’s and father’s safety back home, Jude allows her lifelong interest in performative arts to blossom into a reality.

One thing that I love about middle grade and YA novels that are set in an around a drama room is the idea that young people are, in many ways, trying on different identities during those years. Who am I? Who do I want to be? How do I become that person? And the process of growing up is both a long rehearsal and the actual performance itself. These two excellent novels also encourage me to think about acting as activism, as the expressive element in our existence that points out injustice, encourages empathy and “walking in another’s shoes,” and allows for personal creation and recreation. I look forward to hearing the stories of young people, inspired by these novels, being courageous in the performance of their own lives, acting out to create a more just world and enjoying the thrill of imaginative expression.