Music is often a focus in literature as readers learn about this communicative art form. It is also a way of contextualizing a character, an event or a culture–revealing a diversity of insights into the daily lives and cultures of the people within the stories told. The books shared here, all published in 2019, represent just a few of the ways music exists in our lives. Three of the books are picturebooks sharing family joy that is supported and expressed through music. 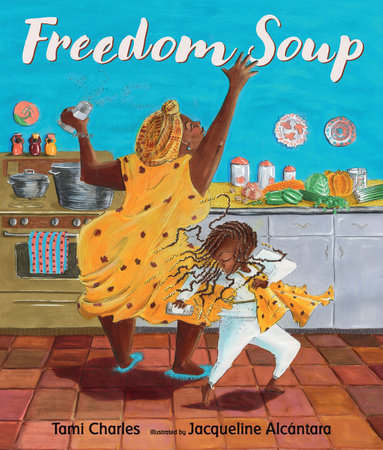 Freedom Soup by Tami Charles and illustrated by Jacqueline Alcántara is a Haitian story told around the Haitian new year custom of making and eating Freedom Soup, a tradition reflecting the Haitian Revolution. As Ti Gran teaches Belle how to make Freedom Soup, readers experience the process as well as the music that enlivens the experience. The kompa not only provides music as they dance around the kitchen, but most importantly, it provides background for Ti Gran as she tells the story of the Haitian Revolution. Both text and illustration afford readers the jubilant feel of the music.

Double Bass Blues written by Andrea J. Loney and illustrated by Rudy Guitierrrez, reveals Little Nic performing with his school orchestra on an instrument larger than he is. His journey home isn’t easy as he travels through the busy city with his double bass on his back, but he is more aware of the noises that surround him than the challenges he meets. When he arrives home, he is greeted by his grandfather who is waiting for Little Nic to play with his band, where Nic can turn the city noises that caught his attention to music.

Salsa Lullaby written by Jen Arena and illustrated by Erika Meza, takes the reader to a bedtime routine that is filled with salsa song, dance and energy. It slows by the end to a loving “Buenas noches.” 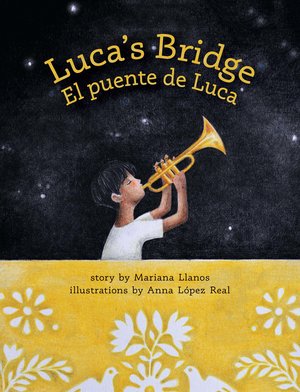 On a more somber note, music reveals hopeful memories and connections between cultures. Luca’s Bridge, El Puente de Luca, by Mariana Llanos is a bilingual book that tells about a young boy who has lived in the USA his whole life but now his family must return to Mexico, a place that is foreign to this child as he was born in the USA. As Luca wonders if he will see his friends again after arriving at his grandmother’s house, he has a dream that the music he plays on his trumpet forms a bridge back to his home. He shares his dream and music with his family providing opportunity for laughter that to Luca is like the music that takes them momentarily back to the home they left. The emotional illustrations by Anna López Real and the author’s note, herself an immigrant to the USA from Mexico, asks readers to consider what deportation does to families and children for whom the USA is home.

While frequently music is an item of interest to a character in a novel, one book spoke to music as being going beyond interest to being his “life.” Impossible Music by Australian author Sean Williams brings together the world of a young musician with that of the deaf culture. Simon, a teenager, has a stroke that leaves him deaf. The importance of music to his life contextualizes the story as he refuses to learn sign language and be counseled. Rather he deals with stages of loss and grief on his own until meeting a young girl who also has hearing loss. Dealing with his new identity and relationship with the hearing world, Simon sets out to create music in a new way.

Operatic, by Canadian novelist Kyo Maclear, is an intersection between a contemporary story and historical musical figure. A graphic novel in format as illustrated by Byron Eggenschwiler, the story involves a middle school music class given an assignment to find “the perfect song” after studying a variety of musical styles, both classical and contemporary. Charlie discover Maria Callas and is intrigued by her passion for music and that she can express herself so well through music. The story offers both Charlie’s story and that of Maria Callas as readers discover music’s potential power. Operatic brings a historical story of music into a contemporary setting, and it serves as a natural bridge to next week’s WOW Currents that shares recent books with a historical focus through music.