Brutal honesty connects award winning illustrators Juana Martinez-Neal and Molly Idle. A new exhibit of original illustrations and picturebooks puts this partnership front and center at the Worlds of Words: Center for Global Literacies and Literatures in the University of Arizona College of Education. Critique to Support and Stretch: A Conversation between Juana Martinez-Neal and Molly Idle is free and open to the public who are encouraged to take in the exhibit and engage in visual critique. 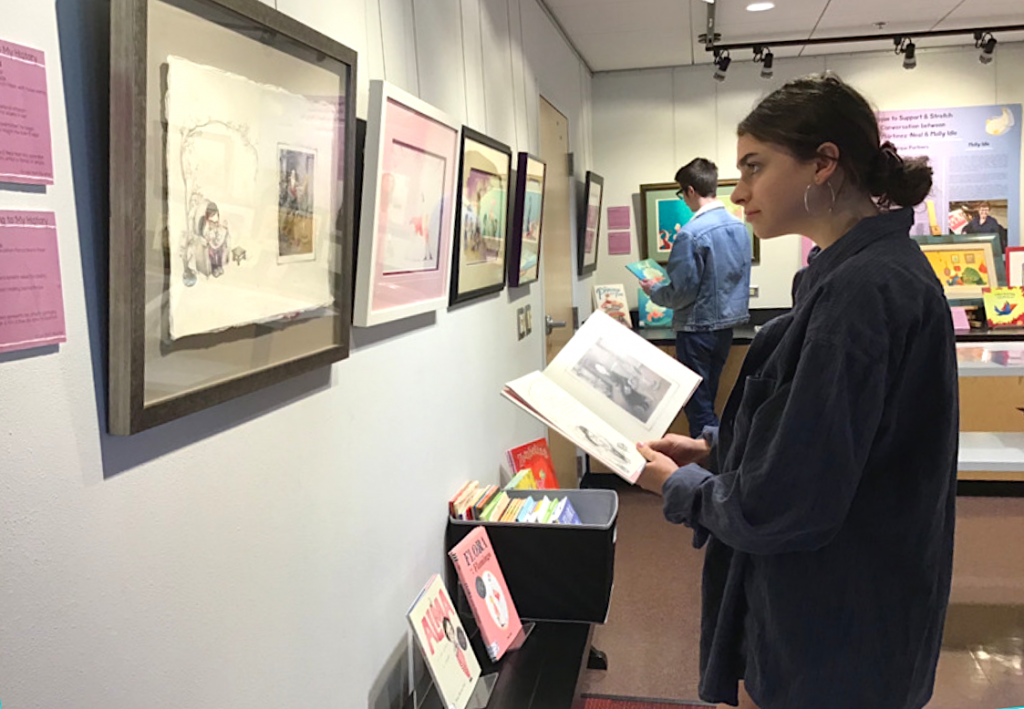 “Many people connect response and revision to the writing process. This exhibit provides a demonstration of how response and revision occur within the illustration process and of the ways in which illustrators can work together in a generative partnership. The visual conversation in this exhibition is engaging and insightful,” says Kathy Short, Professor of Teaching, Learning and Sociocultural Studies and Director of WOW.

Martinez-Neal and Idle met in a workshop in 2006. Both had a background in commercial art and approached the illustration of picturebooks as their serious, full-time career focus. They shared a similar approach to and outlook for their art and craved honest feedback. In their critique partnership, they found the support they needed to reinforce the direction of their work and also the challenge they needed to stretch towards new challenges and possibilities.

“We have this similar level of passion with which we pursue our work and similarly a thickened skin through our commercial art,” says Idle. “We can take it when somebody dishes out harsh criticism of a piece. We don’t take it personally.”

Martinez-Neal agrees, “It’s the work. It’s not directed at us. We just want better work.”

The exhibit contains two parts. The first shows parallel works by the artists, pairing pieces together to showcase moments such as early work, most personal work and approaches to similar experiences or topics. The second part directly connects the ways in which their advice influenced specific pieces.

Visitors to the exhibit will want to pay careful attention to Flora and the Flamingo, a visual narrative Idle illustrated, and Alma and How She Got Her Name, which Martinez-Neal wrote and illustrated. These two books earned Caldecott honors and viewing the work up close with comments from the creators is a special experience. The exhibit also includes a recently acquired piece by Martinez-Neal from Fry Bread: A Native American Family Story, which was written by Kevin Noble Maillard and earned the 2020 Robert F. Sibert Informational Book Award and an American Indian Youth Literature Honor by the American Library Association.

Idle and Martinez-Neal point out that artists engage in all sorts of valuable critique relationships, including mentor/mentee partnerships. Theirs is one of equals that is based on mutual respect, skill level and interest.

“Critique to Support and Stretch: A Conversation Between Juana Martinez-Neal and Molly Idle” includes hands-on activities around critique and the elements of art. It will be on display in Worlds of Words now through August with a reception including appearances by the illustrators from 4:30 to 6 p.m. on April 16. The collection is free to visit and open to the public from 9 a.m. to 5 p.m., Monday-Friday and 9 a.m. to 1 p.m. on Saturdays. For more information, to RSVP for the reception or to schedule a guided tour, contact wow@email.arizona.edu.

UPDATE: The Center created a virtual tour of the exhibit and an invitation to try a Molly Bang exercise. Take a look!