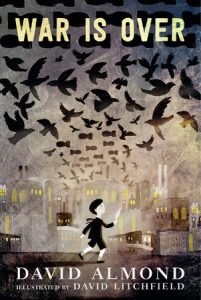 Recently, I was asked if I saw any particular trends in children’s books in the USA over the past few years. It didn’t take long for me to respond given that during the past two years, I had the privilege of working with other educators and librarians on ALA’s Notable Children’s Books committee. As stated on its web page, “As applied to children’s books, notable should be thought to include books of especially commendable quality, books that exhibit venturesome creativity, and books of fiction, information, poetry and pictures for all age levels (birth through age 14) that reflect and encourage children’s interests in exemplary ways.”

During 2019 and 2020 we received books from publishers as well as sought out titles on our own to consider. There was quite a variety of titles across genre, topics, formats and perspectives as well as the range of people creating these books — many books that I would deem “notable”. So, in thinking about these trends, I would like to share over the next few weeks some key titles published in 2020 around the following trends I noted: Picturebooks created by authors and illustrators outside the USA; picturebooks celebrating unique cultural highlights particular to Black families; children’s socio-emotional issues, such as fear or worry, and identity affirmation; issues of family loss through death and separation in adolescent novels. Keep in mind that these are not the only themes that caught my attention; the books shared are not a comprehensive list and each title mentioned can fit within more than one focus here. The titles mentioned may or may not have been included in the final Notable Children’s Book Award list but they were recognized and certainly are worthy of notable mention. Of course, there are many other titles of 2020 that are not part of this conversation. Please feel free to suggest other recent titles that you think important to note for WOW readers.

Given that a key focus of WOW is that of global literature, I thought it fitting to begin with my joy in seeing so many books by global creators included in the books our NCB committee reviewed. It was affirming that such global titles, at least ones written or translated into English or that were wordless and therefore not dependent on the translation of words, are being accepted for publication through publishers who can readily disseminate to educators and librarians in the USA. Global books have been increasingly available over the past years but seeing them represented for consideration for this 2020 award list was refreshing. The following titles all reflect origins outside of the USA, and in sharing these, I use sub-categories that reveal a broad spectrum of topics emerging from other countries.

Several global books that are insightful additions to current text sets on conflict or war are War is Over (David Almond, Great Britain) and Mexique, A Refugee Story from the Spanish Civil War (Maria José Ferrada, Chile). War is Over is about a boy in 1918 whose father is away fighting in the war while his mother works in a factory making munitions. The boy’s questions when the war will end, why the war is even occurring, and how he, who is just a child, can be at war. The innocence with which he views how others on the home front take part in the war only increases his wondering, and readers are left thinking about the futility of war. 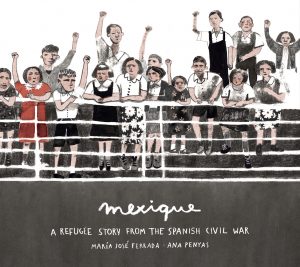 Mexique, A Refugee Story from the Spanish Civil War also carries a significant story about child refugees. Shared earlier this year in WOW Review, Mexique tells of the transport of children from Spain to Mexico during the Spanish Civil War to keep them safe. Their time in Mexico was to be temporary but turned into years and for some a lifetime. Migrants (Issa Watanabe, Peru) is a unique wordless picture book featuring a group of anthropomorphic animals depicting a migrant’s journey of courage, loss, and hope for a better future. Cast on a very dark background, the brightly clad animals travel together followed by a figure representing death and an Ibis, representing both death and life, past and present. Lives are lost in the difficult journey but bright flowers offer a symbol of hope at the end. One more title that focuses on refugees is The Refuge (Sandra le Guen, France). A young girl, Jeanette, befriends a new child at school, Iliana, who is interested in the sky that she says is a refuge for everybody with no borders. The new child is a refugee and over time shares about the difficult journey from her country. The imaginative illustrations throughout, however, reflect a positive tone as the girls view the sky and Iliana plans to be an astronaut. Noting such narratives that come from other countries is extremely important as children within the USA negotiate the immigrant/refugee situation. 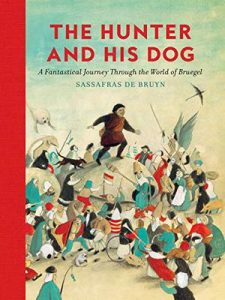 Picturebooks naturally offer insights to visual art, but often we find a more specific focus that informs about a particular artist, illustrated imaginative techniques, or the child as artist. The Hunter and his Dog, a Fantastical Journey through the World of Bruegal (Sassafras De Bruyn, Belgium) reveals a man and his dog on a journey through the art of Bruegal. This wordless picturebook highlights the important works of this 16th century artist while the reader follows the man and dog in a variety of antics throughout. What a Masterpiece (Riccardo Guasco, Italy) provides another wordless adventure. This time a boy goes through his day within different pieces of art across time and cultures, ending by posting his own work for all to see among the artistry of others. Each of the many pieces of art are described in the appendices. The Wanderer shares the artistry of Peter Van Den Ende (Netherlands) as he takes readers on a fantastic journey with a small paper boat. The over-sized book in shades of black, gray and white, pen and ink drawings are reminiscent of Shaun Tan’s work with imaginative sea creatures and ominous images in the sky. Finally, another book with an artistic focus is The Bird in Me Flies (Sara Lundberg, Sweden) which shares the biography of Swedish artist Berta Hanson. Berta was always drawing as a child and that is what she wished to do with her life. However, her father had other plans that involved his daughter following the traditional path of housework, especially important after her mother died. The story shares how she finally broke away from this traditional expectation to do what she most wanted. 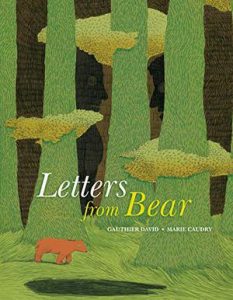 Imagination and often pure enjoyment – with perhaps a touch of philosophy for those who choose to respond in that way — is frequently found in global literature. Imagination and humor are universal characteristics of children’s literature and can impact readers in a very positive way. It affords readers the opportunity to smile at everyday events and recognize simple human emotions that people share across the globe. Letters from Bear (Gauthier David, France) is a delightful story of bear who misses bird when bird migrates for the winter. Told in a series of letters that bear writes to bird sharing his travels and the characters he meets along the way, the narrative ends with a twist that that speaks to the importance of friends. The Three Brothers (Marie-Louise Gay, Canada) takes readers on a walk through the snowy forest in search of adventure and animals like they read about in books. However, disappointed when they do not find any wild animals, they remember what their grandfather has shared about changes in weather and habitat and decide to create their animals out of snow. Finally, There Must Be More Than That (Shinsuke Yoshitake, Japan) is a humorous story that focuses on perspective, choice, and mindset in creating a brighter future. A little girl goes to her grandmother for advice when her brother tells her the future is doomed. The results of her positive thinking might be considered ridiculous at times but is a reminder that how one perceives everyday events is often a choice.