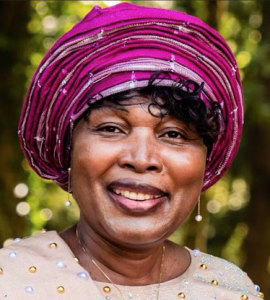 Our field lost a scholar of children’s literature, and we lost a treasured friend and colleague when Vivian Yenika-Agbaw passed away on September 20, 2021. Vivian was a professor of children’s and adolescent literature at Penn State University where she taught in both the residential and World campus programs. She grew up in Cameroon and remained connected both professionally and personally to these roots as she gathered supplies and resources for teachers in that country and wrote about West African and African Diaspora literature for young people through the critical lens of postcolonialism. She was concerned about issues of power and colonialism, not only in books from and about countries in Africa, but in other regions around the world whose literatures are seldom the focus of scholarship. Her research on representations of Africa in children’s books provided both historical and current critical analyses of trends and issues.

Vivian’s scholarship informed our thinking, both about this body of literature and about critical content analysis as a methodology. She joined us in our early meetings about critical content analysis as a research methodology, providing descriptions of her processes as a researcher and her use of critical theory to inform her thinking. In a conference session, a group of researchers each analyzed the picturebook, The Day of Ahmed’s Secret, to demonstrate how each approached critical content analysis. Vivian used postcolonial theory, not to criticize the stereotypes in the book, but to examine how the main character, a boy in Cairo, showed agency. She commented that she wanted to encourage children from his cultural background to not accept the book’s negative images of themselves and their culture but to use a critical lens to negotiate alternative images. When she wrote a chapter about representations of West Africa in children’s books for an edited book on cultural authenticity, she resisted simple outside/insider distinctions of authors to examine the multiple perspectives of authors based on their positions and lived experiences and how that influenced their writing. Vivian searched to understand the complexity of issues within representations in children’s books, digging deeply to examine and discuss those issues, always resisting simple answers or dichotomies. She was willing to think and act against the grain.

Vivan was also a mentor to emerging scholars in the field. She published many edited books, inviting young scholars and scholars from a range of fields to contribute chapters. As a transnational scholar, Vivian inspired and encouraged many transnational scholars. Yoo Kyung Sung recalls how Vivian recognized her voice as a researcher by including her in several edited books. Yoo Kyung published a chapter about colonizers and global outsiders that compares African child soldiers and urban African American gang members in adolescent literature and Yoo Kyung and Junko Sakoi wrote a classroom story about introducing nonfiction books to middle graders. As a transnational scholar, Vivian’s ability to understand the research experiences of other emerging transnational scholars was empowering. Vivian’s mentorship greatly enriched the field of children’s literature and the lives of those scholars.

In addition, Vivian served on many committees for organizations, such as NCTE, USBBY and IRSCL, as well as on book award committees. She was committed to promoting international literature and constantly sought out opportunities to do so, whether serving on award committees, such as Notable Books for a Global Society and the Children’s Africana Book Award, or working on committees and executive boards, such as NCTE’s Global Citizenship Committee and the USBBY Executive Board.

On a personal level, we will miss her wide smile, laughter and warm greeting at conferences. She always had time to sit down and have a long conversation. Greeting her in hallways led us to sit down for a chat and sitting down together turned into a one-hour retreat session like an imaginary yoga studio where our ideas and thoughts were stretched and massaged, and our minds expanded. Only in her passing have we realized how many people’s lives she touched in so many ways. We marvel at her willingness to give so much of her time and effort to develop and promote initiatives around international literature, while also living out a deep commitment and connection to other scholars and educators.

Vivian, you are deeply missed. We hold you in our hearts and minds as a demonstration of what it means to be a dedicated scholar and remarkable human being who changed the world.