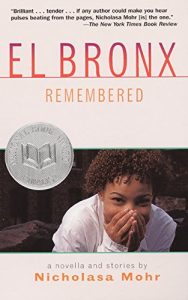 In a city called New York… In a neighborhood called El Bronx… The Fernandex children own a very special pet: A white hen named after their favorite Hollywood movie star. A new girl comes to school – a gypsy child who can read palms and foretell the future. A young boy must face the humiliation of wearing his uncle’s orange roach-killer shoes to his high school graduation. In the South Bronx – or El Bronx, as it’s known to the people who live there – anything can happen. A migrant “fresh off the boat” from Puerto Rico can be somebody on the mainland, pursue the American Dream… and maybe even make it come true. Here are stories that capture the flavor and beat of El Bronx in its heyday, from 1946-1956. A New York Times Outstanding Book of the Year Finalist, 1976 National Book Award for Children’s Literature A Notable Children’s Trade Book in Social Studies (NCSS/CBC).