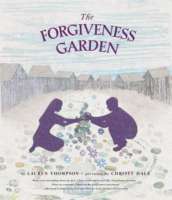 A long time ago and far away–although it could be here, and it could be now–a boy threw a stone and injured a girl. For as long as anyone could remember, their families had been enemies, and their towns as well, so it was no surprise that something bad had happened. Hate had happened. Revenge had happened. And that inspired more hate and more calls for revenge. But this time, a young girl decided to try something different…Inspired by the original Garden of Forgiveness in Beirut, Lebanon, and the movement that has grown up around it, Lauren Thompson has created a timeless parable for all ages that shows readers a better way to resolve conflicts and emphasizes the importance of moving forward together.