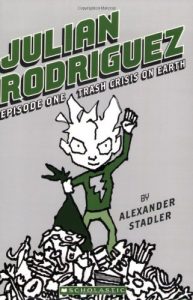 Julian Rodriguez is on a mission for the Mothership. He’s been sent to Earth to study human lifeforms and their bizarre habits–from their disgusting diet (orange sticks named carrots, flavorless liquid called water, and the revolting substance known as vegi-dogs) to their repressive treatment of their young (forcing them to carry out menial tasks known as chores, withholding access to the great cultural masterpieces called cartoons). When Julian’s Maternal Unit assigns a hideous task, it’s nearly too much for the hardened space veteran to bear–but he finds his courage at last. * “First in what readers will hope will be a robust series, this hybrid of fiction and graphic novel dusts off a favorite conceit with a slick swipe of edgy visuals and tart commentary….It’s impossible to read this without laughing.” — Publishers Weekly (starred review)