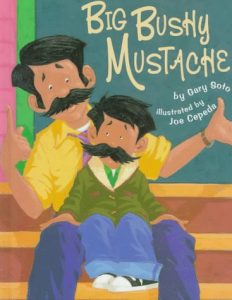 It’s almost Cinco de Mayo, and Ricky’s class is going to put on a play to celebrate the festive Mexican holiday. When asked to choose his costume, Ricky picks a big, bushy mustache, just like his dad’s. He’s tired of everyone telling him he looks like his mother. After all, he’s a boy–he wants to look like his Papi. Although he’s supposed to leave it in school, Ricky wears the mustache home, reveling all the way in how grown-up it makes him feel. But by the time he gets there, the mustache is gone, and Ricky dreads having to tell his teacher what happened.