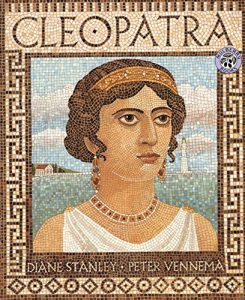 Cleopatra’s name still glitters across history, evoking opulence, ambition, and tragedy. Raised in the shadow of the mighty Roman Empire, she dared to dream of a world united under Egyptian rule. She almost succeeded, and if she had, we would live in a far different world today. Cleopatra was not the renowned beauty of legend–her strength lay in her intelligence, courage, and charm, and she would need all three in her short and perilous reign. She became Queen of Egypt at eighteen and by twenty had been driven from her throne. But she raised an army and won the support of the great Julius Caesar, who helped her return to rule. We will never know what these two brilliant and ambitious people might have accomplished together, for Caesar soon fell to Roman assassins. Instead, it was Mark Antony, another famous Roman, who risked everything with Cleopatra in pursuit Of world power. In this latest of their “distinguished storybook biographies” (New York Times), the authors’ meticulous text and Ms. Stanley’s majestic illustrations capture the brilliance of Cleopatra’s life. From the enchantments of the royal court at Alexandria to luxurious cruises up the legendary Nile, from the intrigues of the Roman marketplace to a desperate sea battle with a shocking end, these award-winning biographers tell the tragic story of one of the most fascinating women of all time.