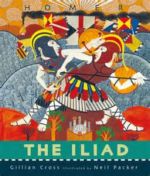 After nine years of war between the Greeks and Trojans, tensions are heating up among men of the same faction as well as those on opposing sides. Two proud and powerful Greeks, King Agamemnon and legendary warrior Achilles, quarrel over a beautiful maiden, causing Achilles and his myrmidons to drop out of the fight. Meanwhile, fueled by rage and pride, honor and greed, soldiers on both sides—-Odysseus and Patroclus for the Greeks, Paris and Hector for the Trojans-—perform heroic deeds, attempting to end the war.