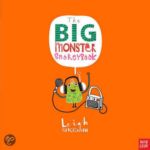 The sleeping monsters are making an awful lot of noise — snoring and grumbling, tapping and chattering. After such a long sleep, what happens if they wake up feeling hungry? Any little monsters around better watch out! With masses of monsters to spot and an awesome onomatopoeic text, children will ask for this hilarious, inventive book over and over again. While the text introduces readers to a cast of curious characters, including knobbly-kneed Norris, Flora the fussy fidget, and snotty Stanley, the illustrations suggest that something pretty monstrous might be going on.