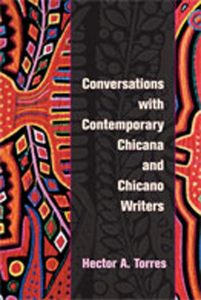 Hector A. Torres conducted these interviews with today’s popular Chicano/a writers, asking each about language and life between languages, about the creative drive that has guided them in their craft and commits them to their art. In sharing their responses, Torres reveals a brief biography of each author and a concise examination of their writings. Taking their stories and essays individually and collectively, Torres explains how each author reiterates issues that have concerned Mexican Americans since at least 1848. Chicano/a authors know that an abundance of politics can spoil a story, as can too little. The writers included here span historical terrain, first, under the shadow of Manifest Destiny and, then, under the America’s imperial sovereignty stance. Interviewees include Rolando Hinojosa (“I Reflect the Way Valleyites Act and React”), Arturo Islas (“I Don’t Like Labels and Categories”), Erlinda Gonzales-Berry (“On the New Mexican Borderlands”), Gloria Anzaldúa (“The Author Never Existed”), Ana Castillo (two separate interviews), Sandra Cisneros (two separate interviews), Pat Mora (“I Was Always at Home in Language”), Richard Rodriguez (“I Don’t Think I Exist”), Demetria Martinez (“To Speak as Global Citizens”), and Kathleen Alcalá (“To Tell the Counternarratives”).