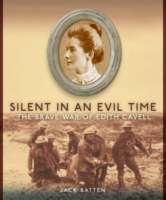 Dutiful nurse, hospital matron, courageous resistance fighter, Edith Cavell was all of these. A British citizen, the forty-eight-year-old Cavell was matron of an institute for nurses in the suburbs of Brussels at the outbreak of World War I. Dedicated to the methods of Florence Nightingale, her intelligence and ferocious sense of duty had transformed the institute into a leading training center.When the Germans captured Belgium in the fall of 1914, an organization was formed to assist British and French soldiers trapped behind German lines. Edith was asked to help and she didn’t hesitate. From that moment forward, Edith sheltered escaping soldiers in her hospital, using trickery to keep the suspicious Germans from discovering them. She helped arrange a secret route to neutral Holland and back to England at great personal risk, enabling soldiers of all ranks to slip through German lines. Using the institute as part of an elaborate Allied escape route, Edith Cavell was responsible for one thousand soldiers eventually making their way home.But Cavell’s role was discovered and a German military court put her on trial in Brussels, where she was sentenced to be executed by firing squad. On October 12, 1915, she put on her nurse’s uniform and met her fate, immediately becoming a worldwide martyr and rallying point for the British in their war against Germany.