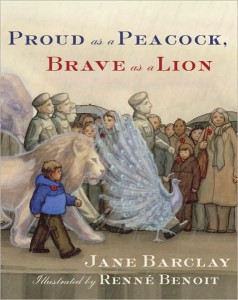 Much has been written about war and remembrance, but very little of it has been for young children. As questions come from a young grandchild, his grandpa talks about how, as a very young man, he was as proud as a peacock in uniform, busy as a beaver on his Atlantic crossing, and brave as a lion charging into battle. Soon, the old man’s room is filled with an imaginary menagerie as the child thinks about different aspects of wartime. But as he pins medals on his grandpa’s blazer and receives his own red poppy in return, the mood becomes more somber.

Outside, the crowd gathered for the veterans’ parade grows as quiet as a mouse, while men and women — old and young — march past in the rain. A trumpet plays and Grandpa lays a wreath in memory of his lost friend. Just then, the child imagines an elephant in the mist. “Elephants never forget,” he whispers to his grandpa. “Then let’s be elephants,” says the old man, as he wipes water from his eyes and takes his grandson’s hand.

Proud as a Peacock, Brave as a Lion has relevance to a growing number of families, as new waves of soldiers leave home.

2 thoughts on “Proud as a Peacock, Brave as a Lion”