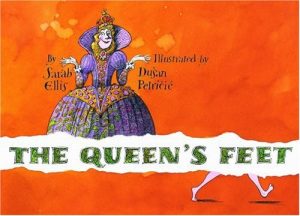 Christie Harris Illustrated Children’s Literature Prize (2007) nominee. Canadian Children’s Book Centre Our Choice, 2007 Queen Daisy can’t help it – It’s her feet that are misbehaving! Queen Daisy had a great deal of trouble with her feet. They had a mind of their own and did not like behaving in a royal way. Proper shoes were out of the question, and sometimes her feet did not wear shoes at all! Her feet were especially naughty when Queen Daisy forced them to dress properly. At balls her feet would kick high in the air or tap-dance on the marble palace floors. Once, when a king from a neighboring kingdom brought his mean, bullying ways to Queen Daisy’s court, her feet hauled off and kicked the king in the ankle. That’s when a meeting had to be called of all the wise women and wizards and footmen in the kingdom to find a solution to Queen Daisy’s terrible problem. And what a solution it turns out to be.Queen Daisy’s feet will dance into the hearts of restless feet everywhere. Sarah Ellis’s wonderfully whimsical tale will ring a bell with all children and adults whose feet get restless.