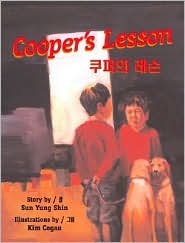 Cooper’s Lesson is an inspiring story about identity and intergenerational friendship, featuring a young biracial boy, written in both English and Korean. Cooper has had about enough of being half and half. And he’s really had enough of Mr. Lee, the owner of his neighborhood grocery store, speaking to him in Korean even though Cooper can’t keep up. Frustrated, he often wonders why things have to be so complicated. Why can’t he just be one race or the other? But one moment in Mr. Lee’s store changes everything. Soon Cooper realizes that the things that make up a person are never simple — whether one talks about them in English or Korean. Richly hued oil paintings and tender vivid prose combine to bring the characters to life.

One thought on “Cooper’s Lesson”