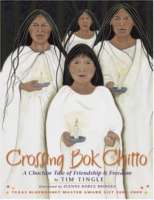 Kids of all ages are always asking Joe Hayes, “How can it snow tortillas?” Now they’ll know where to find the answer: at long last, Joe’s signature book The Day It Snowed Tortillas is appearing in a new bilingual edition. Bloomsbury Review listed the original English-only edition as one of their fifteen all-time favorite children’s books. This bilingual edition has all the original stories as they have evolved in the last twenty years of Joe’s storytelling. It also has new illustrations by award-winning artist Antonio Castro. Storytellers have been telling these stories in the villages of New Mexico since the Spanish first came to the New World over four hundred years ago, but Joe always adds his own nuances for modern audiences. The tales are full of magic and fun. In the title story, for instance, a clever woman saves her silly husband from a band of robbers. She makes the old man believe it snowed tortillas during the night! In another story, a young boy gladly gives up all of his wages for good advice. His parents think he is a fool, but the good advice leads to wealth and a royal marriage. The enchantment continues in story after story—a clever thief tricks a king for his kingdom and a prince finds his beloved in a house full of wicked step-sisters. And of course, we listen again to the ancient tale of the weeping woman, La Llorona, who still searches for her drowned children along the riverbanks.