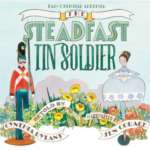 A new version of the classic Hans Christian Andersen fairy tale about a tin soldier who falls in love with a ballerina. As in the original story, the tin soldier’s love for the beautiful ballerina is thwarted by a goblin. The tin soldier is separated from the other toys and washed down a sewer, where he encounters a rat and gets swallowed by a fish, but somehow, against all odds, he manages to end up back home only to be cast into the nursery fire. Rylant adds her own twist to the end of the tale, however, for in this version, the tin soldier and the ballerina are melded to each other, rather than melted, in the heat of the fire, so they’ll never be parted again.