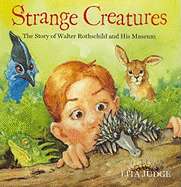 Walter, the son of Lady Emma and Lord Nathan Rothschild, was a very unusual boy. He was born in 1868 to a family of bankers and was nearly the richest boy in the world. But that’s not what made him unusual. Walter was so shy he barely spoke. He had no friends, but he loved every creature that crawled, slithered or flew.  At the age of seven he saw his first circus and was inspired to declare breathlessly to his parents: “I’m going to collect animals from all over the world and build a museum and I’m going to call it My Museum!” The family knew explorers who traveled the world to bring back animals for the London Zoo, and soon Walter had his first exotic creatures: several kangaroos. From there his collection grew and grew, until it threatened to take over the Rothschild estate. Lord Rothschild eventually lost patience with Walter’s hobby and insisted that Walter become a banker, like everyone else in the family. Reluctantly, Walter obeyed, but his dream couldn’t be dimmed–he used his earnings to purchase species from undiscovered lands.  Eventually Walter created the largest zoological collection gathered by one man and was respected throughout the world for his contribution to science. He wrote 1200 books and scientific papers and named 5000 new species. Animals that now bear the name Rothschild include butterflies, fish, a millipede, a fly, a lizard, a porcupine, a wallaby, a bird of paradise, and even a giraffe. The painfully shy boy who never made a good banker forever changed our understanding of the world’s diversity of creatures.