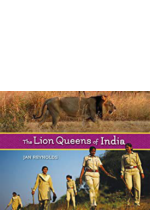 In the far west of India, in Gir National Park, dwells one of the rarest big cats on Earth: the Asiatic lion. Known for its distinctive belly flap and the bushy tassels on its tail, the Asiatic lion once roamed from the Mediterranean Sea to the Bay of Bengal. But human hunting and expansion into their territory eroded the lions’ numbers, until only twelve remained alive.