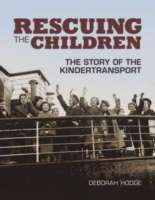 This important book tells the story of how ten thousand Jewish children were rescued out of Nazi Europe just before the outbreak of World War II. They were saved by the Kindertransport — a rescue mission that transported the children (or Kinder) from Nazi-ruled countries to safety in Britain.

The book includes real-life accounts of the children and is illustrated with archival photographs, paintings of pre-war Nazi Germany by artist, Hans Jackson, and original art by the Kinder commemorating their rescue.