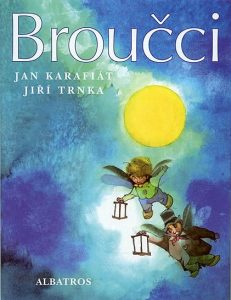 Broučci is a classic children’s book by Jan Karafiát published in the Czech language in the early 1870s. The title is the Czech word for beetles, and the word is also used for “traditional Czech figures of fairylike insect people”[2] such as the characters in the book. In English, the title is often translated as Fireflies.