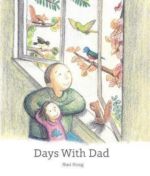 A young girl and her wheelchair-bound father share many special moments because she treasures all they can do together, although he apologizes for not being able to do more.

Two girls experience the highs and lows of friendship on a train journey.

A moving graphic novel telling the true story of a young boy caught up in the terror of World War Two. Peter is just an ordinary boy, who loves playing football with his friends and eating cake – until war comes to his city and the whole family have to go into hiding… This moving, true story of the Second World War, set in Budapest, Hungary, shows in vivid words and pictures how Peter, his cousin Eva and his mum and dad bravely struggle to survive in a city torn apart by warfare.

Putuguq and Kublu are a sister and brother who cannot get along. They love to pull pranks and one-up each other every chance they get! When one of Putuguq’s pranks does not go as planned, the feuding siblings find themselves on the land with their grandfather, learning a bit about Inuit history, between throwing snowballs, that is.

Little Rabbit is playing outside in the garden with questions popping up into his mind. He was curious about Mama’s big eyes, long ears and strong legs. Chinese brush painting combines naturally and perfectly with the little sweet talk between the little rabbit and his mother.

Marthe Jocelyn is back with another clever concept book to follow Hannah’s Collections, Ones and Twos and Where Do You Look? This time, she tackles counting and categories.