This bilingual collection of traditional animal nursery rhymes from Spain, Latin America, and the United States is sure to delight readers young and old. Includes 17 poems handpicked by Ada and Campoy, along with five of their own original poems.

Yum! Tortuga is bringing a delicious supper to his abuela of ensalada, tamales, and flan. No wonder his amigos–Iguana, Conejo, and Culebra–are following him. But they aren’t the only ones after the tortoise. Coyote has his own dinner plans for Tortuga and his grandmother. Can the three amigos warn them in time, in this variation of Little Red Riding Hood? A companions to Mañana, Iguana; Fiesta Fiasco; and Count on Culebra.

There’s always a lot of action in the Mexican American neighborhood where Mr. Lozano lives. Amelia argues with Anita; Benito loves bean burritos but not bumblebees; Hortencia and Herminia hover around like hummingbirds; and Zacarias is catching some Zs on Zachary Street. Jose Lozano’s wacky little stories and illustrations combine Mexican culture with “Sesame Street” smarts to make for a wonderful read-aloud ABC book in Spanish and English. Jose Lozano, who lives in Anaheim, California, makes his living as an elementary school teacher, but his passion is art. He is a rising star in the thriving Latino art scene in Los Angeles. “With this amusing trip through the streets of a Mexican-American neighborhood, readers will discover the lives, adventures, secrets, hobbies and special skills of a most varied gallery of personages. “With the skills of a master storyteller, Lozano creates in each page, in alphabetical order, a lively, one-paragraph portrait using words that start with the same initial letter of his characters’ names: “B is for Benito who loves baseball, bumblebees, and big bean burritos”; “I is for Isabel who likes to stay indoors, cruise the Internet and write interesting stories”; “P is for Pablo who has won many prizes for playing the piano perfectly.” (Los Otros, hermanos Tonio, Lluvia and Chuy, new to the neighborhood, haven’t yet learned English.) “The author’s detailed and vibrant gouache paintings are framed as pictures in an album, reflecting the festive spirit of a real Hispanic community. Crosthwaite’s excellent Spanish rendition maintains the savor and rhyme of the original text and its clever wordplay, making the story enjoyable in both languages. Drawings of alphabet cubes serve as dividers between the texts.”–“Kirkus Reviews”

An award-winning author and a rising star artist have put a festive Latino twist on “The Twelve Days of Christmas,” populating it with piñatas in place of partridges, plus burritos bailando (dancing donkeys), lunitas cantando (singing moons), and much more, all displayed in the most vivid colors imaginable. In this version a little girl receives gifts from a secret amiga, whose identity is a sweet surprise at the book’s conclusion. There are things to find and count in Spanish on every page, with pronunciations provided right in the pictures and a glossary and music following the story. This joyous fiesta will warm even the coldest of hearts.

Juanito loves to count, and what could be more fun than giving and counting kisses! Children’s book author Lee Merrill Byrd was inspired to write Juanito Counts to Ten when she watched her four-year-old grandson Johnny. He was so happy and full of life that he was dishing out kisses to everybody. He kissed his mother, his father, Stray Gray the Cat, and, of course, his grandmother! He was so happy he even kissed his bossy big sister.

Each time Mama asks Roberto to help around the house, he claims to be afraid that a monster will take him away.

A cumulative tale in which Papa Luis’s family and friends make preparations for his birthday fiesta, complete with pinata, cake, and a clown.

A young woman recalls her grandfather’s abiding presence in her life as he cares for her throughout her infancy and childhood while her mother is at school or work, until she is the one fixing his snacks and seeing him safely to bed. 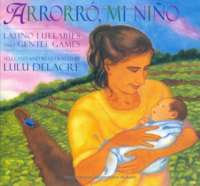 A bilingual recording of the selections in Arrorró, Mi niño, the award-winning collection of traditional Latino baby games and lullabies from fourteen Spanish-speaking countries.