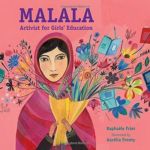 Malala Yousafzai stood up to the Taliban and fought for the right for all girls to receive an education. When she was just fifteen-years old, the Taliban attempted to kill Malala, but even this did not stop her activism. At age eighteen Malala became the youngest person to be awarded the Nobel Peace Prize for her work to ensure the education of all children around the world.

This rollicking and fascinating picture book biography chronicles the life of the first pioneer of children’s books—John Newbery himself. While most children’s books in the 18th century contained lessons and rules, John Newbery imagined them overflowing with entertaining stories, science, and games. 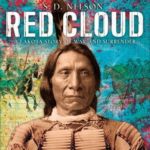 Behold the story of Sophie Blanchard, an extraordinary woman who is largely forgotten despite her claim to being the very first female pilot in history. In eighteenth-century France, “balloonomania” has fiercely gripped the nation . . . but all of the pioneering aeronauts are men.

John Ronald loved dragons. He liked to imagine dragons when he was alone, and with his friends, and especially when life got hard or sad. After his mother died and he had to live with a cold-hearted aunt, he looked for dragons. He searched for them at his boarding school. And when he fought in a Great War, he felt as if terrible, destructive dragons were everywhere. But he never actually found one, until one day, when he was a grown man but still very much a boy at heart, when he decided to create one of his own.

Hans Christian Anderson was born in the slums of Odense, Denmark. His parents were hardworking, and Hans received little formal education, but his childhood was his opening to the world of folklore and fairy tales. Much of his work depicts characters who gain happiness in life after suffering and conflicts and many of his childhood experiences inspired his most famous tales, such as The Ugly Duckling and The Little Mermaid. In this intimate and gripping biography of one of the world’s greatest storytellers, Karen Hesse and acclaimed artist Erik Blegvad connect Hans’s own experiences

For millions of children, living in Europe during World War II was a terrifying experience. Here, eight of those children share their true stories — of living in the Warsaw Ghetto, of being sent to concentration camps, of being selected for “Germanization”. Each story is different, but each represents the stories of millions of innocent victims of the Holocaust. B&W photos.