On a distant Blue Star, Mel, Jim, Naomi, and Doug — friends obsessed with their garage band — don’t seem that different from any of the other twelve-year-old skateboarders at Union Middle School. But everything changes when Mel is kidnapped and imprisoned in a world called the Turtle Realm. As her friends rush to save her, guided by the magical squelp Satorin, they find a world terrorized by a conquering army, a land whose villagers’ only hope is an ancient prophecy foretelling the arrival of four heroes.

Cinderella has many different versions throughout the world, and this book is from Korea.

After Pigling’s mother dies, her widowed father remarries a wicked woman who has her own daughter. Her stepmother and stepsister make her life miserable. Pigling’s stepmother gives her three impossible tasks to complete, but with the help from magical creatures, she is able to complete the tasks. On her way to the festival, when a nobleman passes by and notices her, she is frighten and runs away. The nobleman finds the sandal that Pigling had lost. When he finds the girl whose foot the sandal fits, he proposes marriage on the spot.

This book is written in graphic format.

Quiet, brilliant Portia has just moved to a new neighborhood with her mom. Adjusting to life without a father is hard enough, but school is boring and her classmates are standoffish — and even Portia’s mom is strangely distant. But things start looking up when Portia mounts a late-night excursion into the woods behind her house and discovers a shy, sweet-natured purple monster. Life with Jellaby is a lot more exciting, but Portia’s purple friend has secrets of his own; secrets that may even lead to the mystery of Portia’s father’s disappearance!

As all Tintin fans know, once you’ve read one of his terrific adventures, you’ve got to read another and then another. Each of these collections contains three classic and fully complete Tintin adventures. Packed with all the color, wit, and derring-do that has made Tintin one of the world’s most beloved comic characters, these books are easy to carry and fun to read. each.

Same great Tintin volumes, same 3-in-1 format, with a classy new look! Join traveling reporter Tintin and his faithful dog Snowy, along with well-known friends such as Captain Haddock, as they embark on extraordinary adventures spanning historical and political events, fantasy and science-fiction adventures and thrilling mysteries. These full-color graphic novels broke new ground when they were first released and became the inspiration for countless modern-day comic artists.This repackaged hardcover volume contains 3 classic Tintin stories, including: Tintin and the Broken Ear, The Black Island, and King Ottokar’s Sceptre.

Same great Tintin volumes, same 3-in-1 format, with a classy new look!Join traveling reporter Tintin and his faithful dog Snowy, along with well-known friends such as Captain Haddock, as they embark on extraordinary adventures spanning historical and political events, fantasy and science-fiction adventures and thrilling mysteries. These full-color graphic novels broke new ground when they were first released and became the inspiration for countless modern-day comic artists.This repackaged hardcover volume contains 3 classic Tintin stories, including: The Crab with the Golden Claws, The Shooting Star, and The Secret of The Unicorn. 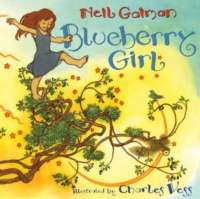 This is a prayer for a blueberry girl . . . A much-loved baby grows into a young woman: brave, adventurous, and lucky. Exploring, traveling, bathed in sunshine, surrounded by the wonders of the world. What every new parent or parent-to-be dreams of for her child, what every girl dreams of for herself. Let me go places that we\’ve never been, trust and delight in her youth. Nationally bestselling author Neil Gaiman wrote Blueberry Girl for a friend who was about to become the mother of a little girl. Here, he and beloved illustrator Charles Vess turn this deeply personal wish for a new daughter into a book that celebrates the glory of growing up: a perfect gift for girls embarking on all the journeys of life, for their parents, and for everyone who loves them. Give her all these and a little bit more, gifts for a blueberry girl.

Stuff. My head’s full of it. I don’t even know where most of it comes from. I just seem to pick it up, like my brain emits a special sort of tractor beam that locks on to pointless information. But in the face of my problems, all the extra stuff is proving useless. What problems? you ask. I shall tell you. Problem 1: The invasion of my home. Dad’s new girlfriend moved in, and, even worse, she brought along her daughter, who has no sense of humor and no taste in music. Problem 2: My girlfriend, Delfine. Her brother would break both my arms if I broke up with her. Problem 3: The new girl at school. Stunning. Gorgeous. Willowy. My Destiny (but see Problem 2). Problem 4: My comic strip. At first it was cool to anonymously author the strip in the school paper, but now that everyone suspects who they are in the strip, I run the risk of getting my legs broken in addition to my arms (see above). Clearly, I need to plan The Great Escape! Part hilarious musings, part graphic novel, stuff is the quirky exposé of a fourteen-year-old boy who, let’s face it, could use a little help.

A heartbreaking story of loss and love.As autumn turns toward winter in 1938 Berlin, life for Marianne Kohn, a young Jewish girl, begins to crumble. First there was the burning of the neighbourhood shops. Then her father, a mild-mannered bookseller, must leave the family and go into hiding. No longer allowed to go to school or even sit in a café, Marianne’s only comfort is her beloved mother. Things are bad, but could they get even worse? Based on true events, this fictional account of hatred and racism speaks volumes about both history and human nature.

In 1984, Marjane flees fundamentalism and the war with Iraq to begin a new life in Vienna. Once there, she faces the trials of adolescence far from her friends and family, and while she soon carves out a place for herself among a group of fellow outsiders, she continues to struggle for a sense of belonging. Finding that she misses her home more than she can stand, Marjane returns to Iran after graduation. Her difficult homecoming forces her to confront the changes both she and her country have undergone in her absence and her shame at what she perceives as her failure in Austria. Marjane allows her past to weigh heavily on her until she finds some like-minded friends, falls in love, and begins studying art at a university. However, the repression and state-sanctioned chauvinism eventually lead her to question whether she can have a future in Iran.